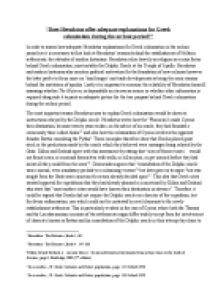 Does Herodotus offer adequate explanations for Greek colonisation during the archaic period?

﻿?Does Herodotus offer adequate explanations for Greek colonisation during the archaic period?? In order to assess how adequate Herodotus explanations for Greek colonisation in the archaic period are it is necessary to first look at Herodotus? reasons behind the establishment of Hellenic settlements, the attitudes of modern historians. Herodotus relies heavily on religion as a main factor behind Greek colonisation, most notably the Delphic Oracle at the Temple of Apollo. Herodotus and modern historians also mention political motivation for the foundation of new colonies however the latter prefer to focus more on ?land hunger? and trade developments as being the main reasons behind the institution of apoikia. Lastly it is important to examine the reliability of Herodotus himself; assessing whether The Histories is dependable on its own as source or whether other information is required along side it to paint an adequate picture for the true purpose behind Greek colonisation during the archaic period. The most important reason Herodotus uses to explain Greek colonisation would be down to instructions relayed by the Delphic oracle. Herodotus writes how the ?Phocaean?s made Cyrnus their destination, because twenty years earlier, on the advice of an oracle, they had founded a community there called Alalia?[1] and also how the colonisation of Cyrene involves the apparent founder Battus consulting the Pythia[2]. ...read more.

On the other hand, both modern and ancient sources agree that political differences had its part to play regarding Greek colonisation during the archaic period. Herodotus explains how the entire Tean populace ?took to their ships and sailed away to Thrace where they founded the city of Abdera?[8] due to pressure from the Persian forces under the command of Harpagus. The impeding nature of a larger, more powerful army aiming to conqueror a city would arguably be a good reason for that group of people to move to a safer area in order to survive. Along with external political enemies being the reason for colonisation amongst the Hellenic peoples, internal political strife was also evident; one example being Dorieus failed attempt to colonise in Libya and later Sicily due to his brother Cleomenes I being crowned King of Sparta[9]. Dillon and Garland assert that along with other factors ?political problems at home were the primary social and economic factors that impelled cities to send out settlements elsewhere?[10] which corresponds with Speake who argues ?the foundation of Tarentum and Cyrene both refer to political strife, while Phocaea was a response to Persian expansion?[11]. Therefore political conflicts did also contribute to the Greek colonisation movement however it could be argued only on a smaller, more specific scale. ...read more.

In conclusion, the reasons Herodotus gives for Greek colonisation during the archaic period are useful as a starting point but not adequate as an entire description of the movements made by the Hellenics. Tales of divine instruction to establish new settlements and heroic singular efforts against the odds given to us by Herodotus hold less weight compared to the economic practicality of creating new communities to relieve the increase of population, a view upheld by most modern historians. Although factors such as religious zeal and political strife were possibly involved in the decision to set up new colonies they are not as significant as the economic advantages concerned. However this view of Herodotus as an inadequate source is by no means a criticism of his ability as a historian, rather a limitation on the reliability of the information he was given. It is clear that Herodotus? resources were flawed and he himself implies that there are restrictions on their usefulness[15]. Luraghi agrees with this assessment of the passage and the Histories as whole by stating ?Herodotus explicitly says a couple of times that his task is to report what is said, regardless of whether he believes it or not?[16]. Therefore Alone, Herodotus offers adequate explanations of the views of locals regarding the founding of settlements and their attitudes towards religion and heroes but must be used alongside archaeology and the views of modern historians in order to paint and adequate picture of Greek colonisation during the archaic period. ...read more.