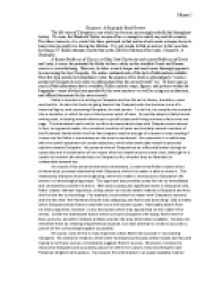 ﻿Minasi Cleopatra: A Biography Book Review The life story of Cleopatra is one which has become increasingly embellished throughout history. To some, the Elizabeth Taylor version of her is enough to satisfy any and all curiosity. For others, however, it is events like those portrayed in that movie which create a deeper desire to know who she really was during her lifetime. It is not simple to find an answer to this question, but Duane W. Roller attempts exactly that in the 2010 first edition of his book, Cleopatra: A Biography. A former Professor of Classics at Ohio State University and current Professor of Greek and Latin, it seems the potential for Roller to focus solely on the available Greek and Roman sources is overwhelming. However, he takes a much deeper and much more thorough approach to uncovering the true Cleopatra. He makes continual note of the lack of information available from this time period, but nonetheless states the purpose of his book as attempting to ?create a portrait of Cleopatra based solely on information from the ancient world? (x). ...read more.

This relationship blossoms from the beginning, when the reader is introduced to Cleopatra?s life events in a chronological approach. This approach also provides a way for him to immediately and consistently consider his thesis. With each subsequent significant event in Cleopatra?s life, Roller creates relevant exposition, being certain to include details related to Cleopatra and how she fits into her surroundings. For example, he provides the reader with Cleopatra?s ancestry and the fact that ?the Ptolemaic Empire was collapsing, and Rome was ascending,? (16) a reality which Cleopatra would have to deal with once she became queen. Noticeably absent from his thesis argument, however, is any description which may appeal fully to the reader?s five senses. Unlike the dramatized stories which surround Cleopatra?s life today, Roller lets the facts, pictures, and other relevant artifacts provide the only information available. He does not embellish these by creating a hypothetical situation, but does attempt to create as accurate a picture of her surrounding kingdom as possible. ...read more.

This drifting can also be seen in Roller?s description of Cleopatra as Isis. Despite vaguely mentioning Isis in various chapters, it is not until his chapter detailing ?The Operation of the Kingdom? that Roller finally dedicates a separate section to Cleopatra?s role as Isis. His details, however, focus more on the role of Isis and Dionysos within Ptolemaic rule than they do on Cleopatra?s choice to portray herself as Isis. Despite these few controversial opinions, it seems evident that Roller has presented a valuable and, in some ways, new representation of Cleopatra, absent of the myths usually associated with her. He makes carefully note, through the words of Plutarch, that ?no one knows the truth? (149). Nonetheless, Roller makes as accurate a depiction as possible of Cleopatra within her own kingdom, focusing on her ancestry, her heritage, her short youth, and the full length of her queenship. Through careful analysis, he presents her as a dynamic woman with a noticeable presence. Mostly, he focuses on her power within and outside of her kingdom, allowing her to make an impact in history?and significant enough that she is still frequently mentioned and studied in modern times ...read more.