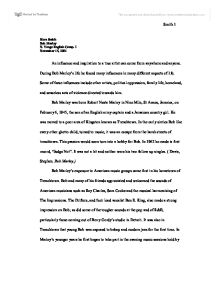 During Bob Marley's life he found many influences in many different aspects of life. Some of these influences include other artists, political oppression, family life, homeland, and senseless acts of violence directed towards him.

Kara Smith Bob Marley N. Vooge English Comp. I November 15, 2001 An influence and inspiration to a true artist can come from anywhere and anyone. During Bob Marley's life he found many influences in many different aspects of life. Some of these influences include other artists, political oppression, family life, homeland, and senseless acts of violence directed towards him. Bob Marley was born Robert Nesta Marley in Nine Mile, St Annes, Jamaica, on February 6, 1945, the son of an English army captain and a Jamaican country girl. He was moved to a poor area of Kingston known as Trenchtown. In the early sixties Bob like every other ghetto child, turned to music; it was an escape from the harsh streets of trenchtown. This passion would soon turn into a hobby for Bob. In 1962 he made is first record, "Judge Not". It was not a hit and neither were his two follow up singles. ( Davis, Stephen. Bob Marley.) Bob Marley's exposure to American music groups came first in his hometown of Trenchtown. Bob and many of his friends appreciated and welcomed the sounds of American musicians such as Ray Charles, Sam Cooke and the musical harmonizing of The Impressions. The Drifters, and their lead vocalist Ben E. King, also made a strong impression on Bob; as did some of the tougher sounds at the pop and of R&B, particularly those coming out of Berry Gordy's studio in Detroit. ...read more.

Growing up in this environment transformed him into a revolutionary artist, who felt the need and passion to express the unjust he and many others faced as poor youths and adults just trying to get by in a country that didn't care for its lower class citizens. As times changed so did Bob's musical sound. Ska faded into "rock steady", ska's distinctive trombones, trumpets, and tenor saxes were blended into the background, the electric bass took on a down-stroking prominence, the guitar asserted itself to punctuate the hiccupping cadence and solo vocals were more frequent. Marley was on target when he linked James Brown with this transition, since R&B was to ska what soul was to rock steady. And when Jimmy Hendrix and Sly Stone arose to add their own style to soul, Bob and the Wailers were prepared to do as much for rock steady. In 1976 Bob agreed to perform at the Smile Jamaica concert. Bob was invited by the government to play; the last thing he wanted to do was play a show sponsored by the government in which he did not support. To some extent Bob had his arm twisted. He was repaying a debt to Tony Spaulding, the Minister of Housing, who had set Bob's family up in their new home in Bull Bay. ...read more.

Marley's presence added the collective energy in a city whose artistic life was undergoing a profound shift through the channel of punk. While in London Bob had changed his mind; after hearing the Clash for the first time, he saw the importance of the punk movement. He admired their spunky courage and anger in the face of England's social stratification and class-based economic oppression. He also admired the help that the Clash and other punk bands were giving to East and West Indians, who were being haunted in the streets by disciples of the neo-fascist National Front. The East and West Indians were also victimized by the bobbies' brutally racist application of the "sus laws," edicts dating back to the Napoleonic wars that allowed police to strip search and harass anyone judged to be "loitering with intent."(Lazell, Barry. Marley 1945-1981.) After the social movements he experienced in London Bob went on to record "Punky Reggae Part", this becoming the definitive celebration of the punk-reggae fusion that was taking place in 1976. In this tiny eleven year period of time Bob proved to be a true rebel, a visionary, an uncompromising victor of human rights. Bob Marley rose from the slums of Trenchtown, Jamaica, to make reggae music and his own message of rebellion, self-determination, and the power of the individual, a spiritual and political force throughout the world. Smith 1 ...read more.