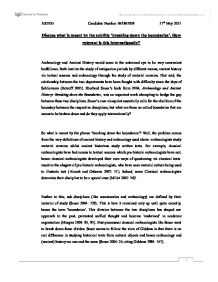 Eberhard Sauers book from 2004, Archaeology and Ancient History: Breaking down the Boundaries, was an important work attempting to bridge the gap between these two disciplines. Discuss what is meant by the subtitle breaking down the bounda

Discuss what is meant by the subtitle 'breaking down the boundaries'. How relevant is this internationally? Archaeology and Ancient History would seem to the untrained eye to be very convenient bedfellows. Both involve the study of antiquarian periods by different means; ancient history via textual sources and archaeology through the study of material remains. That said, the relationship between the two departments have been fraught with difficulty since the days of Schliemann (Rotroff 2005). Eberhard Sauer's book from 2004, Archaeology and Ancient History: Breaking down the Boundaries, was an important work attempting to bridge the gap between these two disciplines. Sauer's own viewpoint essentially calls for the abolition of the boundary between the respective disciplines; but what are these so-called boundaries that are meant to be broken down and do they apply internationally? So what is meant by the phrase 'breaking down the boundaries'? Well, the problem comes from the very definitions of ancient history and archaeology used above: archaeologists study material remains whilst ancient historians study written texts. For example, classical archaeologists have had access to textual sources which pre-historic archaeologists have not, hence classical archaeologists developed their own ways of questioning via classical texts- much to the chagrin of pre-historic archaeologists, who have seen material culture being used to illustrate text (Alcock and Osborne 2007: 11). Indeed, some Classical archaeologists determine their discipline to be a special case (Millet 2007: 30)! Further to this, sub-disciplines (like numismatics and archaeology) ...read more.

Rankov therefore suggests that to really 'break down the boundaries', scholars need the humility to accept that their opinion might not always be right and seek answers from other disciplines (2004: 56). Similarly, Ray Laurence criticised Penelope Allison for apparently not tolerating 'interests of ancient historians in her subject area of archaeology' (Laurence 2004: 105). Laurence's main criticism is that the two disciplines don't talk to each other enough (Laurence 2004: 106). That said, Laurence is generally hopeful that archaeologists and ancient historians can cross the boundaries, as he points to the contributions by the two at Pompeii (Laurence 2004: 107). However, Allison disputes this, saying that scholars from different backgrounds deliberately select their evidence for the questions that concern them (Allison 2008: 46). While there are more universities offering joint honours degrees in archaeology and ancient history, there are still some who do no and place an emphasis on one method of interpretation. While this is so, the boundaries between the two disciplines will always be kept alive (Morgan 2004: 93). There are also problems with the multi-disciplinary approach. While the combination of disciplines allows scholars to gain new insights and approaches, it is unable to convince the 'single-discipline expert' (Rankov 2004: 56). Most, if not all of these British based scholars (though some originate from different countries, they have studied or at least taught at British universities (Sauer 2004: 4)) agree that closer cooperation between the two disciplines would be absolutely beneficial but they also believe that more needs to be done (Rankov 2004: 57; Foxhall 2004: 83-4; Laurence 2004: 111). ...read more.

Spanish and Polish archaeology appear to have been influenced by British theory and German scholarship (Whitely and Stoddart 2009: 23). The study of ancient history and archaeology at Australian and New Zealand universities is incorporated into humanities departments, thus making it isolated study of the subject impossible (Allison 2008: 45). Students there have to combine archaeology and/or Classics with other humanities and sciences which makes the scholar less concerned with disciplinary divides but lacking in specialisation (Allison 2008: 45). Many archaeological projects in Australia are inter-disciplinary, such as the Southern Whaling Project (Stuart 2007: 51, citing Lawrence and Staniforth 1998). The small amounts of Japanese archaeologists that specialise in the Classical world are like their Australian counterparts and open to methods from other disciplines (Allison 2008: 45). It was famously Moses Finley who said that the dialogue between archaeologists and ancient historians read like a 'trades demarcation dispute' (1985: pp. 7, 18-26). A quarter of a century onwards and it doesn't appear to have changed too much. It feels closer to Lin Foxhall's analogy of two feuding children, who, despite the disputes, 'do love each other' really (2004: 76). The disciplines want to ask the same questions but more often than not, answer differently (Rotroff 2005). The overwhelming majority of scholars would agree that more dialogue needs to take place between the two disciplines in order to benefit the other, but it seems to be held back by bickering and antiquated academic institutions. The good news is that new generations of scholars are seeking to engage with other disciplines in Britain and Germany and are already doing so in Australasia. Progress is slow, but it is improving. ...read more.