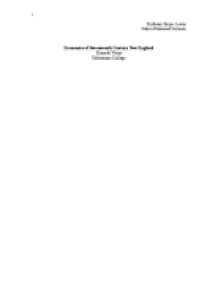 ﻿Professor Boyer Lewis Salem Possessed Seminar Economics of Seventeenth-Century New England Kenneth Weiss Kalamazoo College During the seventeenth-century, New England went through many social, religious and economic changes. In Salem Possessed, Boyer and Nissenbaum focused primarily on how Salem?s economy caused factionalism within the village. As a result, they neglected to examine the larger New England economy and the origins of its transformation. In order to fully understand the effects of the diversifying New England economy, one must learn about how Puritans felt about materialism and private ownership. From these fundamental Puritan ideologies, one can understand that as more people became entrepreneurial, problems within society were inevitable. Thus, the transforming Puritan economy caused social and religious factionalism in seventeenth-century New England. Economic ideologies of Puritans were fundamental to the rise of factionalism. Aboard the Arbella, off the coast of Massachusetts, Governor John Winthrop said, ?The care of the public must oversway all private respects? for it is a true rule that particular estates cannot subsist in the ruin of the public.?[1] From the beginning, colonial leaders expected all the new immigrants to put the greater good of the community over their own self-interests. Furthermore, these leaders told those who wanted to go to New England for the prospect of making money to do so elsewhere as they did not embrace providentialism.[2] This is the belief that God?s will is evident in all occurrences including commerce. ...read more.

After these unfortunate events, many people petitioned the government for private ownership of land. In 1623, private land ownership became a reality. With this new system, people became more productive as they provided for themselves. As a result, the next harvest was plentiful. As the years passed, private ownership also became popular in the Massachusetts Bay Colony. Just ten years after the settlement of Boston, towns allowed people to fence off certain portions of land for themselves so they could grow what they wanted. Also, with continued disputes over the common lands between neighbors, government officials often bided off excess land for private ownership.[8] As the transition to private land ownership continued, more people bought land farther away from the town center in order to expand their potential profits. This new capitalistic system would soon cause social and religious factionalism as John Winthrop warned. By examining the histories of Salem Village and Salem Town, one can understand how underlying tensions contributed to social and religious factionalism. Since the founding of Salem Town, commercialism existed. The reason this happened, is seen when Boyer and Nissenbaum stated, ?The fine natural harbor, with its network of rivers providing access to the interior, was selected in 1626 by Roger Conant as a likely spot to found a fishing station and trading post.?[9] This geographical description of the area shows that Salem Town began as a commercial venture. ...read more.

Keayne?s persecution showed the commercialist resistance from traditional Puritans deepened social factionalism. Finally, from looking at the religious views of entrepreneurs in Boston, one can see factionalism. Mark Valeri showed this when he stated in Heavenly Merchandise, ?Many merchants set themselves apart from other New Englanders not only by their social and political agendas but also by a distinct religious ethos. They shared an affinity for radical versions of puritan teaching on deviations. English critics branded them with names such as Antinomians.?[15] Antinomianism argued that if predestination existed, then it did not matter if you followed religious laws. It made sense business owners would adopt this sect of Christianity as their morals conflicted with mainstream Puritanism. For commercialists, Antinomianism allowed them to justify their business practices with religion. The existence of this division of Christianity showed that religious factionalism existed in seventeenth-century New England. Seventeenth-century New England proved that transforming economies have a direct effect on religion and society as a whole. In order to appreciate how economics caused social and religious factionalism, one must have a deep understanding of Puritan commercialist ideologies. By looking at major New England ports such as Salem and Boston, it was evident that factionalism existed as a result of the rapidly changing economy. Therefore, the transforming Puritan economy caused social and religious factionalism in seventeenth-century New England. ...read more.