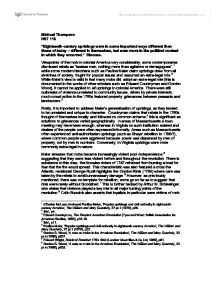 Eighteenth-century uprisings were in some important ways different than those of today different in themselves, but even more in the political context in which they occurred. Discuss.

Michael Thompson HST 118 "Eighteenth-century uprisings were in some important ways different than those of today - different in themselves, but even more in the political context in which they occurred." Discuss. Viewpoints of the mob in colonial America vary considerably, some contemporaries dismissed rebels as "lawless men, nothing more than agitators or demagogues",1 while some modern historians such as Pauline Maier claim uprisings drew from all stretches of society, fought for popular issues and assumed an extra-legal role.2 While Maier's view is valid in that many mobs did adopt an extra-legal role (this is documented in the works of other scholars such as Edward Countryman and Gordon Wood), it cannot be applied to all uprisings in colonial America. There were still outbreaks of violence unrelated to community issues, driven by private interests; much crowd action in the 1760s featured property grievances between peasants and landowners.3 Firstly, it is important to address Maier's generalisation of uprisings, as they tended to be unrelated and unique in character. Countryman claims that rebels in the 1760s thought of themselves locally and followed no common scheme;4 this is significant as solutions to grievances varied geographically. In areas of Massachusetts a town meeting may have been enough, whereas in Virginia no such institution existed and desires of the people were often expressed informally. Areas such as Massachusetts often experienced anti-authoritarian uprisings (such as Shays' rebellion in 1786/7), where common people were aggrieved because power was dispensed by men of property, not by men in numbers. ...read more.

The popular rebellions were driven by the changing political climate of the revolution. Constant fears of tyranny from a foreign monarch created public anxiety; rumours spread of an ecclesiastical conspiracy against American liberties.20 Such fears were perpetuated by increased British efforts to make money from the colonies, such as the Revenue/Sugar Act (1764) and the Stamp Act (1765). There was a nascent belief among contemporaries that the British were attempting to "force the colonies into a rebellion" and take the opportunity to "treat them with severity... and reduce them to servitude".21 Such anxieties will inevitably have impacted upon the common people. The late 1760s also saw sudden colonial expansion, attracting opportunistic outsiders, this not only resulted in increased social tension but in a more powerful customs administration, preserving the fears of coercion.22 It is necessary to conclude that uprisings were different when considering their wider political context. New groups were constantly making their grab for power in the colonies, resulting in no long-standing political stability, 23 a prerequisite for the formation of extra-legal conventions. There was little consistency in local government, but there was also a lack of uniformity at the imperial level; after the repeal of the Stamp Act in 1766 it appeared as though the colonies had exerted some power over the monarchy. This was not the case as the British government came to strengthen their principles and asserted parliamentary power over the colonists "in all cases".24 This was accompanied by an increase in rioting: Gordon Wood claims that crowd action affected all major settlements and ...read more.