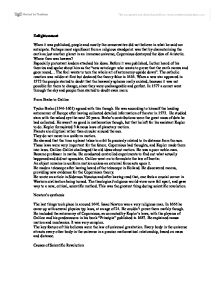 Enlightenment When it was published, people and mostly the conservative did not believe in what he said nor anticipate. Perhaps most significant from a religious standpoint was that by characterizing the earth as just another planet in an immense universe, Copernicus destroyed the idea of Aristotle. Where then was heaven? Especially protestant leaders attacked his ideas. Before it was published, Luther heard of his theories and spoke about him as the "new astrologer who wants to prove that the earth moves and goes round... The fool wants to turn the whole art of astronomy upside down". The catholic reaction was milder at first but declared the theory false in 1616. When a new star appeared in 1572 the people started to doubt that the heavenly spheres really existed, because it was not possible for them to change, since they were unchangeable and perfect. In 1577 a comet went through the sky and people then started to doubt even more. From Brahe to Galileo Tycho Brahe (1546-1601) agreed with this though. He was according to himself the leading astronomer of Europe after having collected detailed information of the star in 1572. ...read more.

Bacon was a politician and writer was the greatest propagandist for the new experimental method. He wanted new knowledge to be followed through experimental research. One shouldn't speculate. Then general principles won't emerge. The empirical method would produce highly practical useful knowledge, giving a new effective justification for the pursuit of science. Descartes was more systematic. He wanted to doubt everything you could doubt etc. 3. Finally, the Catholic Church was initially less hostile that Protestan and Jewish religious leaders and Italian scientist therefore played a crucial role in scientific progress right up to the trial of Galileo in 1633. Some other countries then became more toleranta because they did not have strong religious leaders etc. i.e. England. After 1640 science was quite accepted in England. Some consequences of scientific revolution 1. The SR went hand in hand with the rise of a new expanding social group, the international scientific societies founded in many countries. Expansion of knowledge was the goal of them. 2. The revolutionary scientific method was highly critical and it differed profoundly from the old way of getting knowledge about nature. It refused to base its conclusions on tradition and established sources on ancient authorities. ...read more.

Since it was now more accepted, some phil. started to exaggerate certain Enlightenment ideas. In System of Nature, written by Paul d'Holbach, he argued that human beings were machines completely determined by outside forces. God etc. was myths. Many philosophers did the same thing. Rousseau (1712-1778) was a brilliant but difficult thinker. He came to believe that his philosopher friends and the women of the Parisian salons were plotting against him. He broke with them, and lived thereafter alone. He committed his life to individual freedom, but attacked rationalism and civilisation as destroying rather than liberating, the individual. His ideas also had a great impact on Child psychology and modern education. According to R. the general will is sacred and absolute, reflection the common interest of all the people who have displaced the monarch as the holder of sovereign power. Urban Culture and Public Opinion The writings and press campaigns of the philosophers were part of a cultural transformation. The European market for books grew dramatically in the 18th century. Many books were smuggled in france though, because of the censorship. Porno works were also smuggled of high political figures!! Reading was now more for everyone, and a so called so-called "reading revolution" had begun! Reading became individual, rapid and silent. And the reading spread. ...read more.