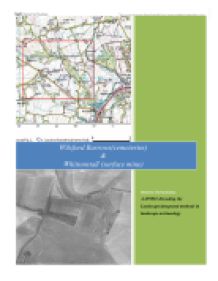 Introduction: In this assignment I will be analyzing and critically evaluate two different archaeological reports, the first one is a survey report about Wilsford Barrows cemetery and the second one is a geophysical survey about surface mine near Whittonstall. So I will discuss and assess how effectively each report succeeds as a 'level 3 report' as defined by the English Heritage. Comparing and considering these reports I am going to see their relative effectiveness at conveying archaeological information and interpretations. Finally, considering the practical/field work on which these reports are based I will try to interpret and recommend the current issues that may have been developed around access to that works. 1. Stonehenge World Heritage Site Landscape Project Wilsford Barrows Archaeological Survey Report by Mark Bowden According to this archaeological survey, Wilsford Barrows it's a group of major importance cemeteries located in Stonehenge. Even though the Wilsford Barrows group surveying near a monument of great importance and numerous studies conducted around this (Stonehenge), unfortunately has received less attention than most other major barrow groups and has not been the subject of modern excavation (aerial survey or geophysical survey) ...read more.

chain from a cauldron or similar and Imported objects are also represented including the very rare glass bead etc.), dimensions for the graves, burials and cremation and raises the questions and the discussions that were created around them. He, also, provides us with some photos of the area (a map, an ordnance survey antiquity model, two aerials photographs, and a survey plan), an image with a grave good and some tables with data found in the excavation. According to Level 3 report from English Heritage, this archaeological survey report of Mark Bowden gives us all the information that we need to understand the time, the space, and the conditions of this excavation. The scale of the images that have been used were correct (1:1000 or larger). It was really easy for me to read and understand it but I think that the range of measured and annotated drawings as well as photographs and reconstruction/phased diagrams was poor, I needed more. ...read more.

survey but in order to be able to reach some results, concerning the Level 3 report, we must take the guidelines outlined by English Heritage and by the IfA. The scale of the images that have been used were correct (1:1000 or larger). Is not difficult to understand this survey but when it comes a time for considering the pictures, if you do not know about magnetometer data you can't interpret them. This was the only difficulty that I encountered. Conclusion: Both surveys can be said that they were effective, and depending on the way of writing, convey to readers archaeological information and interpretation. You can get the main point. I think that both of them can be characterized as Level 3 report, but both of them have some deficiencies. I would personally prefer the first survey because it was easier to me to understand it, it was clearly and I have read it more easily. But I would prefer to contain more images of the findings and more area maps. I hope that through this assignment I was able to answer the points that I have raised in the beginning. ...read more.