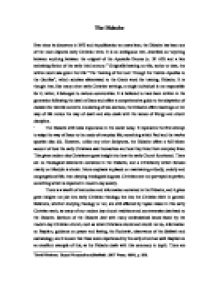 Ever since its discovery in 1873 and its publication ten years later, the Didache has been one of the most disputed early Christian texts.

The Didache Ever since its discovery in 1873 and its publication ten years later, the Didache has been one of the most disputed early Christian texts. It is an ambiguous text, described as 'anything between anything between the original of the Apostolic Decree (c. 50 AD) and a late archaising fiction of the early third century.'1 Originally bearing no title, author or date, the written work was given the title "The Training of the Lord Through the Twelve Apostles to the Gentiles", which scholars abbreviated to the Greek word for training: Didache. It is thought that, like many other early Christian writings, a single individual is not responsible for it; rather, it belonged to various communities. It is believed to have been written in the generation following the death of Jesus and offers a comprehensive guide to the adaptation of Judaism for Gentile converts. Consisting of two sections, the Didache offers teachings on the way of life versus the way of death and also deals with the issues of liturgy and church discipline. ...read more.

Sections of the Didache deal with many ecclesiastical issues faced by the modern day Christian church, such as what Christians should and should not do, information on Baptism, guidance on prayer and fasting, the Eucharist, observance of the Sabbath and eschatology, and it is seen that these were experienced by the early church as well. Baptism is an excellent example of this, as the Didache deals with this ceremony in depth. There are specific instructions given in regard to baptism, instructions that we still follow today; 'Baptize thus: Having said all these things beforehand, immerse in the name of the Father and of the Son and of the holy Spirit in flowing water'2 The use of the Trinitarian formula is important as this, along with Matthew is the earliest instance of it being used in the rite of Baptism, and it is interesting to note that we still use the formula in Baptism today. This information is relevant to all Christian life, and therefore all believers. As well as topics specific to the Christian church, the Didache also deals with secular matters which would be of interest to non-believers. ...read more.

Yet, despite this, it is still valuable to all walks of modern day life. Although written thousands of years ago, it can help to clarify God's word, as it gives clear instructions on how a believer should lead their life; instructions which Christians still try to follow today. The Didache also helps to reassure the twenty-first century Christian as it lets us know that the way in which we practice our faith (how we baptise, take the Lord's Supper and seek to live a righteous life), is in harmony with the people who wrote this text, the people who lived it from the beginning. It is not only relevant to Christians today, but to society as a whole, as it shows how the people of the early Church faced a lot of the issues that confront not just the Church today, but societies today, issues such as abortion and murder. Essentially a manual detailing how Christians should lead their lives, the Didache is also the first source on Baptism, The Eucharist, and the problems faced by the early Church. While this is essential reading for any theology student, there is also a lot which can be learned from the Didache and adapted to suit modern day life. ...read more.