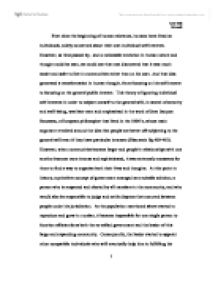 Ever since the beginning of human existence, humans have lived as individuals, solely concerned about their own individual self interests.

Ever since the beginning of human existence, humans have lived as individuals, solely concerned about their own individual self interests. However, as time passed by, and a noticeable evolution in human nature and thought could be seen, we could see that man discovered that it was much easier and safer to live in communities rather than on his own. And that idea generated a transformation in human thought, from focusing on his self interest to focusing on the general public interest. This theory of ignoring individual self interests in order to subject oneself to the general will, in search of security and well-being, was later seen and emphasized in the work of Jean Jacques Rousseau, a European philosopher that lived in the 1800's, whose main argument revolved around the idea that people are better off subjecting to the general will even if they have particular interests (Ebenstein Pg.459-461). However, when communities became larger and people's relationships with one another become more intense and sophisticated, it was extremely necessary for them to find a way to organize both their lives and thoughts. At this point in history, a primitive concept of government emerged as a suitable solution; a person who is respected and elected by all members in the community, and who would also be responsible to judge and settle disputes that occurred between people under his jurisdiction. As the population mentioned above started to reproduce and grow in number, it became impossible for one single person to function efficiently as both the so-called government and the leader of this large and expanding community. Consequently, the leader started to appoint other compatible individuals who will eventually help him in fulfilling his complicated task, and that marked the origin of what we call today a governmental bureaucracy. Now that there is more than one person in power, a new basis for authority was required, which was also accompanied by new emerging and clashing self interests by the people. ...read more.

Abi Sufyan, who had been cursed by the messenger of God...He made the servants of God slaves, the property of God something to be taken by turns. And His religion a cause of corruption." (Crone) "Then there took charge his son Yazid...a sinner in respect of his belly and his private parts." (Crone) There were also many others who used religion as a tool to reach their goals. They include Marwan, Banu Marwan, and Yazid b. 'Abd al-Malik. Through these letters and comments we can easily see the undermining of religion by the caliphs and legal rulers, who were supposed to rule according to the Sunna and the Islamic Shari'a, and how they used the divinity and authority of religion and its concepts to coerce the strength of the government and the minds of the whole Ummah. Since then, history has evolved and the Muslim Ummah has greatly expanded with numerous victories, while having corrupt Caliphs and leaders that have taken this Ummah to a stage that it has never dreamt of. While looking at the Middle East and the so-called Islamic states today, one would have to ask whether or not their governments are in fact compatible with the Islamic religion, and whether or not they would be better off being secular like many European states. In order to reach a reasonable conclusion concerning this issue one has first to briefly tackle the issue of whether or not Islam is compatible with secularism. Can there be a Muslim country with a secular state? First of all we have to look at the status of some of the Muslim countries world-wide where we would find out that: "Algeria, for example, is a modern westernized state and hence it is undergoing a great religious turmoil as a section of citizens want it to be an 'Islamic state' of their vision. Then there are countries like Malaysia and Indonesia with mixed populations though with Muslim majority and they too have secular states." ...read more.

Tunisia, a state where Islam is the state religion has a Constitution that provides for the free exercise of other religions that do not disturb the public order, and the Government generally observes and enforces this right, however it does not allow for religious freedom of radicals that defy the rules and laws of the existing regime in order to cause an uprising, revolt, or complete change in the system. The Government recognizes all Christian and Jewish religious organizations that were established before independence in 1956. Although the Government permits Christian churches to operate freely, only the Catholic Church has formal recognition from the Government. This shows that Tunis as an Islamic state tends to deviate from the norms of Islamic practices while moving away from being a radical state like Saudi Arabia in trying to implement the rule s and laws of God on the people in order to guide them to the true and guided path. Tunis agrees and believes that the integration of ideas and interaction of cultures is the way to development, even if this will cost the loosening on sticking and grasping onto the religious tendencies and constructing a rightly guided Islamic State according to the previous Islamic Ummah. In conclusion, I would like to say that point of views all around the Islamic world differ on this issue. It has been proven over the centuries that when related to the government, Islam can be both beneficial and harmful. Beneficial in terms of creating an organized, well-structured state, and harmful in the sense that corrupt leaders can use the name of Islam for their own self interests. Totally applying the Shari'a today might seem extremely hard especially in today's modern world. It is very obvious that a lot of Muslim countries are stuck in the middle of nowhere; saying that they abide by the Shari'a, while their laws are not. All I can say is that it will perhaps take more politicians, philosophers, religious leaders and thinkers to finally make these countries be aware of where they truly stand. ...read more.