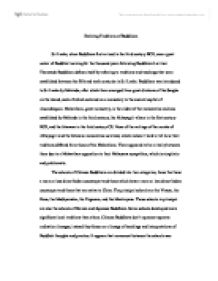 Evolving Traditions of Buddhism Sri Lanka, when Buddhism first arrived in the third century BCE, was a great center of Buddhist learning for the thousand years following Buddhism's arrival. Therevada Buddhism defines itself by referring to traditions and teachings that were established between the fifth and tenth centuries in Sri Lanka. Buddhism was introduced to Sri Lanka by Mahinda, after which there emerged three great divisions of the Sangha on the island, each of which centered on a monastery in the ancient capital of Anuradhapura. Mahavihara, great monastery, is the oldest of the monasteries and was established by Mahinda in the third century, the Abhayagiri-vihara in the first century BCE, and the Jetavana in the third century CE. ...read more.

The principal schools are the Vinaya, the Kosa, the Madhyamaka, the Yogacara, and the Mantrayana. Those schools in principal are also the schools of Korean and Japanese Buddhism. Some schools developed more significant local traditions than others. Chinese Buddhists don't represent separate ordination lineages; instead they focus on a lineage of teachings and interpretations of Buddhist thoughts and practice. It appears that movement between the schools was normal but the early attempts to establish the norms of Buddhist monastic practice in China seemed to of been hindered by a need of knowledge of the Vinaya. Ch'an, which derives from the Sanskrit dhyana, is used in Indian Buddhist theory to designate the attainment of a deep state of peace by the means of calm meditation. ...read more.

Bodhidharma is said to of emphasized the teachings of the Lanka atara Sutra and the conjectural basis of Ch'an centers on the ideas of the tathagatagararbha and emptiness as pointing past all abstract forms of thought. By the middle of the sixth century all Indian Buddhist text had been translated into Chinese. Although over five different Ch'an schools had emerged by the ninth century, only two remained important after the government's suppression of Buddhist monasticism in the Lin Chi and Ts'ao Tung. The Ch'an literary and intellectual traditions centers on the stories of the sayings and the deeds of these CH'an masters. They may be portrayed as behaving in unexpected and spontaneous ways and responding to questionbs with riddles in order to jolt their pupils into a state of awakening. ...read more.