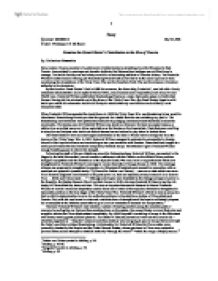 Examine the Great Elector's Contribution to the Rise of Prussia.

Essay Course: MO3013 18/11/03 Tutor: Professor H M Scott Examine the Great Elector's Contribution to the Rise of Prussia. By: Hubertus Nasserite Early modern Prussia consisted of a patchwork of dotted territories stretching from the Rhineland to East Prussia. Accumulated by marriage and dynastic fortitude, the Hohenzollern heritage was a difficult one to manage. Territorial disunity was and always would be a dominating attribute of Prussian history. Yet Frederick William's achievement of having put Brandenburg-Prussia back on her feet is all the more impressive when considering the devastations of the Thirty Years War and the Swedish-Polish War and the absence of electoral authority in his dominions. By the time the 'Great Elector' died in 1688 his successor, the future king Frederick I, was left with a firmly centralised administration and a capital at Berlin-C�lln, sound finances and a respectably sized army of some 30,000 men. Frederick William established Brandenburg-Prussia as a major diplomatic player in North-East Europe. Having led his principality out of the abyss of the Thirty Years War, the Great Elector forged a solid basis upon which his successors could build Europe's administratively most efficient and militarily most disciplined state. When Frederick William acceded the ducal throne in 1640 the Thirty Years War was threatening to tear apart his inheritance. Brandenburg-Prussia provided the grounds for a battle that she was not taking any part in. The Brandenburg core territories were particularly badly hit by pillaging mercenary bands that freely roamed the countryside. The twenty year old Frederick William was stuck in a dilemma: He faced an empty treasury, a rabble of an army that was every bit as exploitative as the Swedes or the Imperialists, Diets that were unwilling to obey him and subjects who could not defend themselves and refused to pay others to defend them. ...read more.

Wladyslaw IV of Poland had to intervene personally with the K�nigsberg estate to ensure that a Calvinist cleric could take his father's burial service. All this was a 'deep humiliation'9 and can only be interpreted as a direct challenge to Frederick William's authority. This is probably why - after having been hit by the gauntlet in the 1640s - Frederick William as a mature ruler prevented K�nigsberg and the Brandenburg towns from recovering their economic muscle following the wars of the 1640s and 1650s. He would rather see their economies dwindle than let their wealth challenge his political authority.10 Throughout his reign Brandenburg-Prussia was seen as one of Europe's most tolerant countries. Her tolerant and immigrant-friendly policies attracted Protestant elites from all-over Europe, especially France, whose Huguenots contributed significantly to the rise of Prussia. They were so important in economic terms that Frederick William risked a contraction in relations with Louis XIV by defending the Edict of Potsdam in 1985.11 The wrestle for power with the estates occupied much of the Great Elector's time and patience: More than once rebellious 'evil'12 estate deputies were denounced as 'godless, frivolous and insolent'.13 Historians are but divided over the nature of estate power which so evidently thwarted Frederick William's rule. Carsten emphasises the power of the nobility. In his view "At the beginning of the seventeenth century the ruler himself was nothing more than a primus inter pares... . There was nothing to indicate that Brandenburg or Prussia would ever play a major part in German or in European affairs."14 The situation in 1640 was but not as desperate as Carsten makes out. Brandenburg-Prussia was a major German power: In terms of land mass only second to Habsburg Austria. ...read more.

During the six years of war in the 1650s some 1.5 million thalers were wrestled from Cleves-Mark.24 Resistance was tough because the Cleve estates had powerful patrons such as the Dutch Republic and the Empire. Frederick William was lucky: The Dutch and the Habsburgs failed to intervene because both parties wanted Brandenburg-Prussia to resist the invading Swedes. Frederick William took his chances. In Prussia and the Rhineland, he decided on shows of strength by disabling the heads of opposition. In the Rhineland, following the May 1654 Reichsabschied, Willich zu Winnenthal was arrested and carted of to Berlin. Opposition quickly quietened down. In Prussia the estates and the nobility, who were openly flirting with the Polish, were discouraged to rebel by the arrest of the alderman Roth of K�nigsberg in 1662 and the execution of von Kalckstein in 1671. This essay inevitably concentrates on the first half of the Great Elector's reign because this era undoubtedly witnessed his greatest achievements. Once the inexperienced Frederick William had taken the hurdles of war during the 1640s and 1650s, the consolidation and expansion of his rule from 1660 onwards was inevitable. The War of the North in particular was a "turning point in the relations between the elector and the estates in all his territories."25 It provided the Elector with the opportunity to foster his rule not only in Brandenburg proper but also in his difficult Prussian and Rhenish territories. Brandenburg-Prussia ultimately benefited from the wars that the Great Elector fought, because they created unity. Experiences such as the glorious victory at Fehrbellin produced an image of a rising Prussia and a Great Elector: "Celui-ci a fait de grandes choses"26 - the man who averted the threat of republicanism in Cleves-Mark, who earned Hohenzollern sovereignty over Prussia and who incorporated the estates into a modern absolutist Prussian state. ...read more.