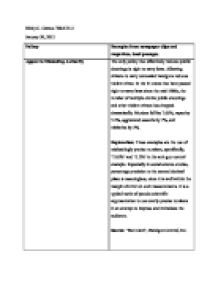 Examples of how fallacies can be used in argumentative writing.

Ricky C. Camus / BSAT3-2 January 30, 2012 Fallacy Examples from newspaper clips and magazines, book passages. Appeal to Misleading Authority The only policy that effectively reduces public shootings is right-to-carry laws. Allowing citizens to carry concealed handguns reduces violent crime. In the 31 states that have passed right-to-carry laws since the mid-1980s, the number of multiple-victim public shootings and other violent crimes has dropped dramatically. Murders fell by 7.65%, rapes by 5.2%, aggravated assaults by 7%, and robberies by 3%. Explanation: These examples are the use of misleadingly precise numbers, specifically, "7.65%" and "5.2%" in the anti-gun control example. Especially in social science studies, percentage precision to the second decimal place is meaningless, since it is well within the margin of error on such measurements. It is a typical tactic of pseudo-scientific argumentation to use overly-precise numbers in an attempt to impress and intimidate the audience. Source: "Fact Card", Handgun Control, Inc. Complex Question "How am I to get in?" asked Alice again, in a louder tone. "Are you to get in at all?" said the Footman, "That's the first question, you know." Explanation: A question with a false, disputed, or question-begging presupposition. Source: Lewis Carroll, Alice's Adventures in Wonderland, Ch. 6. Argumentum ad Hominem Osama Bin Laden: ...At the time that they condemn any Muslim who calls for his right, they receive the highest top official of the Irish Republican Army at the White House as a political leader, while woe, all woe is the Muslims if they cry out for their rights. Wherever we look, we find the US as the leader of terrorism and crime in the world. The US does not consider it a terrorist act to throw atomic bombs at nations thousands of miles away, when it would not be possible for those bombs to hit military troops only. These bombs were rather thrown at entire nations, including women, children and elderly people and up to this day the traces of those bombs remain in Japan. ...read more.

Source: Basil Cottle, The Plight of English: Ambiguities, Cacophonies and Other Violations of Our Language (Arlington House, 1975), pp. 33-34. Red Herring The most telling moment in last night's [State of the Union] speech came after the president noted that "key provisions of the Patriot Act are set to expire next year." In response, notes the New York Times, "some critics in Congress applauded enthusiastically." If Osama bin Laden watched the speech, one imagines him applauding too. Explanation: That Osama bin Laden might approve of the expiration of provisions of the Patriot Act does not show that American critics are wrong to also approve, since the reasons for their approval are different. Some Americans oppose parts of the Patriot Act because they believe that it infringes upon the rights of Americans without significantly helping to prevent terrorism. They may be wrong, but that doesn't make them an al Qaeda cheering squad. Source: James Taranto, "The al Qaeda Cheering Section", Best of the Web Today, 1/21/2004 False Precision Implausibly precise statistics...are often bogus. Consider a precise number that is well known to generations of parents and doctors: the normal human body temperature of 98.6 degrees Fahrenheit. Recent investigations involving millions of measurements have revealed that this number is wrong; normal human body temperature is actually 98.2 degrees Fahrenheit. The fault, however, lies not with Dr. Wunderlich's original measurements-they were averaged and sensibly rounded to the nearest degree: 37 degrees Celsius. When this temperature was converted to Fahrenheit, however, the rounding was forgotten, and 98.6 was taken to be accurate to the nearest tenth of a degree. Had the original interval between 36.5 degrees Celsius and 37.5 degrees Celsius been translated, the equivalent Fahrenheit temperatures would have ranged from 97.7 degrees to 99.5 degrees. Explanation: Occurs when numerical data are presented in a manner that implies better precision than is actually the case; since precision is a limit to accuracy, Source: John Allen Paulos, A Mathematician Reads the Newspaper (Anchor, 1995), p. ...read more.

Jones is responsible for the rise in crime." The increase in taxes might or might not be one factor in the rising crime rates, but the argument hasn't shown us that one caused the other. Explanation: To avoid the post hoc fallacy, the arguer would need to give us some explanation of the process by which the tax increase is supposed to have produced higher crime rates. And that's what you should do to avoid committing this fallacy: If you say that A causes B, you should have something more to say about how A caused B than just that A came first and B came later. Slippery slope "Animal experimentation reduces our respect for life. If we don't respect life, we are likely to be more and more tolerant of violent acts like war and murder. Soon our society will become a battlefield in which everyone constantly fears for their lives. It will be the end of civilization. To prevent this terrible consequence, we should make animal experimentation illegal right now." Since animal experimentation has been legal for some time and civilization has not yet ended, it seems particularly clear that this chain of events won't necessarily take place. Even if we believe that experimenting on animals reduces respect for life, and loss of respect for life makes us more tolerant of violence, that may be the spot on the hillside at which things stop-we may not slide all the way down to the end of civilization. And so we have not yet been given sufficient reason to accept the arguer's conclusion that we must make animal experimentation illegal right now. Explanation: Like post hoc, slippery slope can be a tricky fallacy to identify, since sometimes a chain of events really can be predicted to follow from a certain action. Here's an example that doesn't seem fallacious: "If I fail English 101, I won't be able to graduate. If I don't graduate, I probably won't be able to get a good job, and I may very well end up doing temp work or flipping burgers for the next year." ...read more.