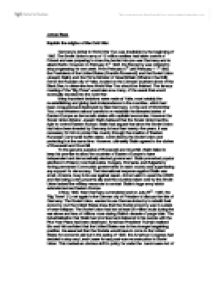 Explain the origins of the Cold War.

James Rees Explain the origins of the Cold War. Germany's defeat in World War Two was inevitable by the beginning of 1945. The Soviet Union's army of 12 million soldiers had taken control of Poland and was preparing to cross the border into pre-war Germany and to attack Berlin. However on February 3rd 1945, the Red army was ordered to stop progressing for one week. From February 4th until February 11th 1945, the Presidents of the United States (Franklin Roosevelt) and the Soviet Union (Joseph Stalin) and the Prime Minister of Great Britain (Winston Churchill) met in the Russian city of Yalta, located on the Crimean southern shore of the Black Sea, to determine how World War Two should be finished. The famous meeting of the "Big Three" would also sow many of the seeds that would eventually develop into the Cold War. Many important decisions were made at Yalta, most notably the re-establishing and giving back independence to the countries, which had been conquered and destroyed by n**i Germany. At the end of World War Two, most Western nations wanted to re-establish the liberated states of Eastern Europe as democratic states with capitalist economies. ...read more.

The Truman Doctrine of March 12, 1947 gave aid in excess of $400 million to Greece and Turkey and effectively marked the formal declaration of the cold war between the United States and the Soviet Union; furthermore it displayed America's position regarding the containment. Perhaps surprisingly, Soviet response to the Truman Doctrine was one of acceptance as it went along with the Marxist ideas of two rival worlds, one capitalist, and the other communist. For Stalin and the communists, such a final class struggle would be ultimately decided by Marxist ideas about historical development, and thus would result in the victory of communist USSR over capitalist America. The Truman Doctrine led to an increase in intensity between the United States and the Soviet Union, as the Soviet Union believed that the United States was attempting to spread capitalism across Europe particularly to the new Eastern Block countries. The Soviet Union believed that governments within Europe should be communist and therefore allied with her against capitalism. In May and June 1947, America announced its decision to regenerate Germany and Japan. Secretary of State George C. ...read more.

Such a move was clear proof of American determination that the Soviets and communism would not win regardless of any cost, however while it undoubtedly worried the Soviets and increased tension it did not force either party into requesting peace and by 1952, America had developed the H-b**b, or hydrogen b**b which was capable of mass destruction on a scale far greater than the bombs dropped on Hiroshima and Nagasaki. However by August 1953 the Soviet Union too had a similar device. This type of behaviour would become commonplace over the next 30 years, with both countries struggling to keep up and appear superior to the other. As we have seen, within a relatively short period of history, the two most powerful nations on the face of the world had gone from being allies in a war to despising one another and everything the other stood for. The Cold War had begun. Footnotes (1) Two of the original "Big Three" were not in attendance at Potsdam. American President Franklin Roosevelt had died and been succeeded by Harry Truman, British Prime Minister Winston Churchill had been replaced by Clement Atlee. (2) George Kennan, Memoirs, 1925-1950 (New York: Pantheon Books, 1967), pp. ...read more.