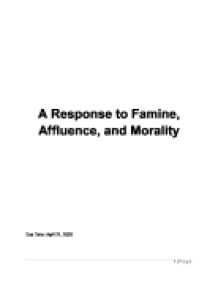 Famine purposes a great problem to humanity. Singer explains how famine in east Bengal took a swing at humanity. (Singer, 1972 at p.1)[1] He argues that the reaction of people in relatively affluent countries is unjustified to situations similar to like t

A Response to Famine, Affluence, and Morality Due Date: April 21, 2009 Famine purposes a great problem to humanity. Singer explains how famine in east Bengal took a swing at humanity. (Singer, 1972 at p.1)1 He argues that the reaction of people in relatively affluent countries is unjustified to situations similar to like that in Bengal. The moral eye needs to be tampered with in light of these issues. (Singer, 1972 at p.1)2 The purpose of this paper is to analyze Peter Singer's argument. According to Damer's five criteria of a good argument, it would be safe to claim that peter singer has made a good argument. (Damer at p. 30)3 Though singer's argument is good and persuasive, his paper is not free from criticisms against certain points he raises while making his argument. I would like to point out two important issues with his paper. Firstly, there should not have been a criticism for not donating. Secondly, discussion over misspent aid funds should have been included in his argument, since it is a serious problem. Despite these issues, idea presented in Singer's thesis should be supported. Singer begins his argument by criticizing the public for not giving large sums to relief funds, among other criticisms. ...read more.

If I start to list the recorded cases of misspent and misused aid money, one would be shocked, more shocked in looking at the cumulative amount of misspent aid money. If you want to see aid money misspent, you would not even have to look back more than a month. For example, on March 27, 2009, Washington Post reported misspent of $480,000 in aid. "A U.N. official in Afghanistan spent aid money on ... buying luxury furnishings for his house in Kabul, flying first-class and eating in expensive restaurants in cities around the world, on at least one occasion, he simply removed $65,000 from a safe, the report charged"(UPI at p.1)7. Scary thing is there might also be many unreported cases of such evil. One could argue that although a lot of the money has been misspent and misused, there is still a large proportion that contributes to the aid. There is no doubt that a large proportion gets used in the right place. However, it still ruins the credibility of these programs and it de-motivates new and existing donors. For example, if you are a consistent donor and had donated in the Afghanistan aid, mentioned above, most likely, you would have felt robbed and would be less likely to donate large sums, especially in that specific aid. ...read more.

Therefore, we all have the power to provide, and since there is no harm, instead future benefits for all, we should provide. Although we may think that by giving away we are losing money, Singer indirectly mentioned that we are actually protecting future harm. (Singer, at p. 3)12 In conclusion, the point Singer has raised should not be taken lightly. We should act upon what he has asked from us. Saving life of others, by means of donation, is not to his benefit, but to the benefit of humanity and we should all, collectively, participate in it since it is morally good. We must realize that just because we are fortunate of having all the meals we want, not everyone is. There are numerous unfortunate people who struggle just to find one piece of bread for a day. Moreover, we should also urge our governments to have security over our aid money. This would increase confidence in donors and get to the people that are in need of it. Lastly, it would have been better for singer not to criticize people of where and how they spend their money, since they are not spending towards harming someone. Instead he should have encouraged everyone to spend towards a humanitarian cause while they afford their new clothes and cars. ...read more.