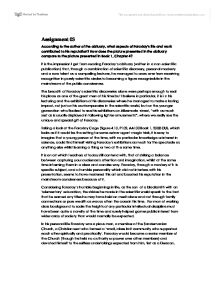 It is the impression I get from reading Faraday’s obituary (written in a non-scientific publication) that, through a combination of scientific discovery, personal modesty and a rare talent as a compelling lecturer, he managed to cross over from receiving recognition in purely scientific circles to becoming a figure recognizable in the mainstream of the public conciseness.

The breadth of Faraday’s scientific discoveries alone were perhaps enough to seal his place as one of the great men of his time but I believe in particular, it is in his lecturing and the exhibitions of his discoveries where he managed to make a lasting impact, not just on his contemporaries in the scientific world, but on the younger generation who flocked to see his exhibitions on Albemarle-street, “with as much zest as is usually displayed in following lighter amusements”, where we really see the unique and special gift of Faraday.

Taking a look at the Faraday Cage (figure 4.10, P102, AA100 Book 1, 2008 OU), which looks as if it could be the setting for some extravagant magic trick, it is easy to imagine that a young person of the time, with no particular knowledge or interest in science, could find himself visiting Faraday’s exhibitions as much for the spectacle as anything else whilst learning a thing or two at the same time.

It is an art which teachers of today still contend with, that of striking a balance between capturing your audience’s attention and imagination, whilst at the same time informing them in a clear and concise way. Faraday, through a mastery of his specific subject, and a humble personality which did not interfere with his presentation, seems to have mastered this art and boosted his reputation in the mainstream conciseness because of it.

Considering Faraday’s humble beginnings in life, as the son of a blacksmith with an ‘elementary’ education, the strides he made in the scientific world speak to the fact that he earned any titles he may have held on merit alone and not through family connections or pure wealth as was so often the case in his time. For man of working class background to scale the heights of any particular intellectual discipline must have been quite a novelty at the time and surely helped garner public interest from wider array of society than would normally be expected.

In his personal life Faraday was a pious man, a member of the Sandemanian Church, a Christian sect who formed a ‘small, close knit community who supported each other spiritually and practically’. Faraday would become a senior member of the Church (though he held no authority or power over other members) and devoted himself to the selfless undertakings expected from him, first as a Deacon, and later as an Elder. It seems the Church gave Faraday firm foundations and a sense of worth away from science, “In an important sense Faraday was much closer to Thomas Boosey, George Leighton and Mary Straker (members of the Church) than he was to numerous scientists who passed through the doors of the Royal Institute” (p96 AA 100 book 1 OU 2008).

This strong religious foundation, I believe, not only helped Faraday in his personal life, but also helped to form a favourable impression on the rest of Victorian society. In a time of high morals and progressive thinking, Faraday the humble, selfless Church Elder, and Faraday the brilliant and precocious scientist combined to form the perfect ‘gentleman of science’, someone whom every Victorian, poor or rich, could feel assured in admiring.

All quotes taken from the Obituary from The Times, 28 August 1867 in the AA100 assignment booklet OU 2010 unless otherwise specified.