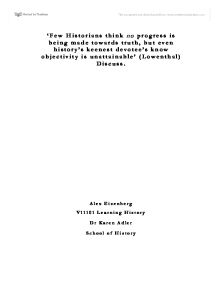 'Few Historians think no progress is being made towards truth, but even history's keenest devotees know objectivity is unattainable' (Lowenthal) Discuss.

'Few Historians think no progress is being made towards truth, but even history's keenest devotee's know objectivity is unattainable' (Lowenthal) Discuss. Alex Eisenberg V11101 Learning History Dr Karen Adler School of History 'Few Historians think no progress is being made towards truth, but even history's keenest devotees know objectivity is unattainable' (Lowenthal) Discuss. The ultimate conclusion for an historian is to conclude that he or she has found the truth. This however is an unattainable goal. No historian will ever be able to find what was the real truth because we cannot know the reality of the past. Two reasons help us explain this, firstly, because the past has gone we are unable verify any claim that we make, therefore we cannot be sure what the 'truth' is. Secondly, whatever evidence the historian cannot be using is not objective. It has been created by other humans who are subject to the same fallibility that the modern day historian is also subject to. Lowenthal's statement recognises these two ideas but also present is the idea that the historian is 'progressing' towards the truth. The idea of 'progress' simply suggests that historians are moving towards 'truth'. In order to understand this we have to realise that 'history is less than the past because only a tiny fraction of events have been noted...'1, so to know the truth we, at the very least, have to have all the evidence at hand. Given the fact that this is impossible all historians can do is try to 'progress towards the truth', despite never actually getting there. ...read more.

It questions and tries to explain how we know anything. History is related to philosophy in terms of what is it possible to know about the past. This is a problem because if it is difficult to know about something that exists, it is going to be even more difficult to say something about the past -something that does not exist. This sort of 'knowledge is therefore likely to be tentative'5, and manufactured by historians who will be operating within a particular social and cultural framework (amongst many other things). Therefore historians who are trying to gain access to the 'real past' or the 'truth' are mistaken because they can never get there. For historians such as Elton, there is doubt to the fact that we cannot know anything. This is what furthers his efforts to try and attain the truth but they are clearly in vain. Because, as Lowenthal exhibits in the quotation, we cannot achieve objectivity because the historian is always subject to his or her own presuppositions and pressures. If we admit that we cannot really know what happened then we have to question how specific histories were shaped. We have to take into account epistemology because it informs everything that we do. Jenkins explains how unlike direct memory, which is itself doubtful, history relies on the eyes, ears and voice of somebody else. Therefore we cannot be sure about anything that we use as evidence. Lowenthal makes the point that this is not detrimental to history because in practice the historian has to adhere to quite a specific methodology where the reader has access to the sources used. ...read more.

It would be impossible to know for sure which method would aid the search for the truth the most. There is no denying that the methods would be coherent but the fact remains that because of the limitations upon them we would not actually be progressing in our study of history. But instead we would be creating a history that is moving further away from what the truth may have been. Historians cannot be objective in their study of history, they are subject to a whole host of constraints and limitations that make written history particularly subjective. However this is not necessarily a problem. There needs to be a recognition that historians are working under limitations instead of the traditionalist viewpoint. The methodologies of Elton, Marwick, Carr and many other historians, that try to suggest that they can eliminate all the presuppositions and ideological ideas that may be present in the historian, cannot work. This is because at every juncture we are inextricably linked to social, political and cultural constraints. Therefore Lowenthal's claim represents a broad spectrum of opinion. By using the word 'progressing' in terms of moving towards some truth, he accepts the fact that we have not yet reached it (and that we never will) but he also is making a comment on the nature of history. That without the debate and the interpretation we would not be progressing at all. Whilst truth is the nirvana of history, if we found the truth there would be no more searching. History is about postmodern historiography, a framework where interpretation is vital and where there is recognition that objectivity and truth are unattainable. ...read more.