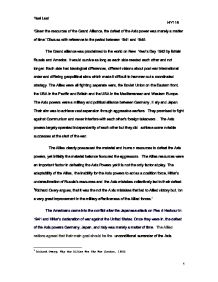 Given the resources of the Grand Alliance, the defeat of the Axis powers was merely a matter of time. Discuss with reference to the period between 1941 and 1945.

'Given the resources of the Grand Alliance, the defeat of the Axis power was merely a matter of time.' Discuss with reference to the period between 1941 and 1945. The Grand alliance was proclaimed to the world on New Year's Day 1942 by Britain Russia and America. It would survive as long as each side needed each other and not longer. Each side had ideological differences, different visions about post war international order and differing geopolitical aims which made it difficult to hammer out a coordinated strategy. The Allies were all fighting separate wars, the Soviet Union on the Eastern front, the USA in the Pacific and Britain and the USA in the Mediterranean and Western Europe. The Axis powers were a military and political alliance between Germany, Italy and Japan. Their aim was to achieve vast expansion through aggressive warfare. They promised to fight against Communism and never interfere with each other's foreign takeovers. The Axis powers largely operated independently of each other but they did achieve some notable successes at the start of the war. The Allies clearly possessed the material and human resources to defeat the Axis powers, yet initially the material balance favoured the aggressors. The Allies resources were an important factor in defeating the Axis Powers yet it is not the only factor at play. The adaptability of the Allies, the inability for the Axis powers to act as a coalition force, Hitler's underestimation of Russia's resources and the Axis mistakes collectively led to their defeat. ...read more.

They did not work out their common priorities nor were their war plans coordinated. This enabled the Allies to turn the tide of the war and seize the initiative. Industry was central to the Allied view of warfare. Germany and Japan did not consider economics as central to the war effort, focusing on willpower, resolve, and endurance as the prime movers in war. Eventually, factory for factory, the Allies made better use of their industry than their enemies thereby winning the long war of attrition. The Allied resources were a definite advantage in the lead up to their eventual victory yet the outcome of the war was ultimately derived by Hitler's mistakes and was his responsibility. The invasion of Russia, the battle of Stalingrad 1942, was a decision that Hitler took which may have been the single greatest reason for the Axis defeat. Hitler's failings and mistakes stand at the top of the list in causing the Axis defeat and can explain the outcome of the war. 6In 1942 Hitler believed that Russia was beaten for military reasons and he said 'this winter Russia would probably suffer the same fate as Napoleon.' Hitler believed that by capturing western Russia he could precipitate the collapse of its economy. Reinhardt argues that Hitler clearly misjudged Russia's situation. He believed that the red army was in a far worse situation then the German troops and thus he arrived at an incorrect assessment of the situation. ...read more.