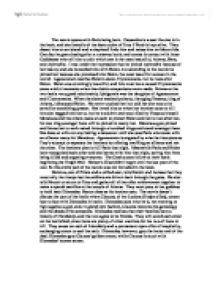 Greek Literature - Helen of Troy Vs. The Illiad.

The movie opens with Paris being born. Cassandra is a seer like she is in the book, and she foretells of the destruction of Troy if Paris is kept alive. They desert him on an island and a shepherd finds him and raises him on Mount Ida. One day he goes chasing after a runaway lamb, and comes in contact with three Goddesses who tell him to pick which one is the most beautiful; Athena, Hera, and Aphrodite. I was under the impression that he picked Aphrodite because of her beauty and she rewarded him with Helen, but according to the movie he picked her because she promised him Helen, the most beautiful woman in the world. Agamemnon marries Helen's sister, Clytemnestra, but he lusts after Helen. Helen was stunningly beautiful, and this must have caused Clytemnestra some wistful moments when inevitable comparisons were made. However the two had a very good relationship. Iphigeneia was the daughter of Agamemnon and Clytemnestra. When the sisters reached puberty, the aging Theseus, king of Athens, kidnapped Helen. He never touched her but told her she was to be saved for something greater. She loved him so when her brother came to kill him she begged him not to, but he wouldn't and was killed by Theseus himself. ...read more.

. In the movie they never showed Hector with a wife or son. Paris meets up with Hector near the gates, and Hector takes a softer tone with his brother than before. He recognizes that Paris, when he does fight, is a capable warrior, but explains that he cannot stand it when Paris hangs back from battle. Hector then speaks wishfully of a day when the Achaeans will be driven away forever and the Trojans can give thanks to the gods. One of the biggest differences in the movie is how brave Paris was; he fought Menelaus instead of running like he did in the book. Helen didn't have to argue with him to get him to fight. The relationship of those brothers was not one of warrior to coward but of much loved first and only son to Paris the intruder thought the relationship between Menelaus and Agamemnon was interesting. It was more like how the book described the sons of Priam relationship, with Menelaus being Agamemnon's shadow and having to constantly be urged to fight. Among the Trojans, Antenor tells Paris that he should give back Helen and all of the other treasures he stole from the house of Menelaus. ...read more.

They both get up and walk out of the tent they were hiding under alive. So Achilles challenges H the killing of Patroclos by Hector. It makes his murder of Hector seem brutal and useless. The timing of that murder is different also it happens after the duel between Menelaus and Paris. Hector to settle the duel. He kills Hector unmercifully while Hector is unaware. The movie fails to mention the murder of Patroclos by Hector. It makes Achilles killing Hector seem brutal and useless. The movie fails to mention that Priam has other sons and daughters; it emphasizes the aloneness the family feels after their deaths. The movie goes on to show the murder of Achilles by Paris, as well as the murder of Paris by Agamemnon. The movie doesn't emphasize the theme of mortals being controlled by the immortals at all. While reading the book I felt a great affinity for the Greeks and none of the Trojans except Hector. The movie made me hate all of the Greeks especially Agamemnon, who I already disliked before. He is willing to do anything, even sacrifice his own daughter, to get what he wants, which is Troy and Helen. I felt extremely satisfied when his wife avenged the sacrificial murder of her daughter and the rape of her sister by slaughtering Agamemnon. Greek Literature Helen of Troy Vs. The Illiad Quianah D. Upton ...read more.