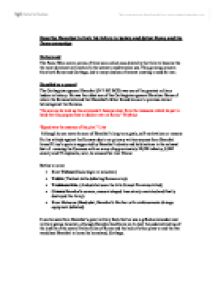 Describe Hannibal in Italy his failure to isolate and defeat Rome and the Zama campaign Background The Punic Wars were a series of three wars which was driven by the thrist to become the the most dominant civilization In the western mediteranian sea. This growing concern from both Rome and Carthage, led to many clashes of interest creating a need for war. Hannibal as a general The Carthaginian general Hannibal (247-182 BCE) was one of the greatest military leaders in history. He was the oldest son of the Carthaginian general Hamilcar Barca of whom the Romans believed that Hannibal's father forced his son to promise eternal hatred against the Romans. "As soon as he took up his command it became clear from the measures which he put in hand that his purpose was to declare war on Rome." Polybius "Speed was the essence of his plan." Livy Although he can never be sure of Hannibal's long term goals, self-motivations or reasons For his attitude against the Romans due to no primary written sources from Hannibal himself Livy's quote is supported by Hannibal's drastic and bold actions in the colossal feat of crossing the Pyrenees with an army of approximately 50,000 infantry, 9,000 cavalry and 37 elephants; next, he crossed the river Rhone Battles to come * River Ticinus (Gauls begin to volunteer) * Trebia ( Tactical skills defeating Roman army) ...read more.

the Roman decisions on public affairs were superior, so that although they met with complete disaster, they were finally by the wisdom of their counsels victorious over the Carthaginians in the war." VII. The Roman Republic compared with others - Polybius The Roman constitution of the Senate aloud the flexibility for its generals and strength of its allies to overcome any enemy. It can be seen that the power given to the Roman consuls in power was a major advantage compared to Carthage. The consul, when he leaves with his army invested with the powers I mentioned, appears indeed to have absolute authority in all matters necessary for carrying out his purpose V. On the Roman Constitution at its Prime - Polybius While the Roman generals had this ability Hannibal did not benefit from such a system as it is seen with the lack of military support and eventual late reinforcements which did not change the course of the war. It can also be seen that Hannibal did not have the full support of his government as he felt necessary to send his brother Mago Barca to Carthage to announce victory by pouring out hundreds of golden rings taken from the bodies of the Romans killed in action at the entrance of the Carthaginian Senate building. This is again evidence that Hannibal had to convince his government to follow in support, while the Roman consuls were given the support of the senate. ...read more.

to fill the gaps. The Roman left wing possessed Italian allied Calvary, while the right wing contained Numidian Calvary. Hannibal also aligned his troops in three lines with the mercenaries at the front, second the Carthaginian forces and lastly the Veterans from the campaign in Italy. At the front were his elephants, while the wings were made from Carthaginian and Numidian Calvary. The battle soon began with a charge from the war elephants, however the gaps with roman skirmishes aloud the elephants to pass without causing much trouble. Scipio also ordered all trumpeters to blow at the same time, causing the elephants to flee had come in contact with their own Calvary. Immediately after the elephant failure the Roman Calvary attacked destroying the Carthaginian Calvary which began to flee. Then the Roman infantry charged, and soon Roman discipline began to win over forcing back the Carthaginian lines, with mercenaries fleeing. The Roman Calvary returned and attacked the rear Carthaginian lines. This decided the battle, and the Carthaginian army was collapsing to its destruction. Many state that these tactics by Scipio were ironically that of Hannibal at Cannae, however Scipio won due to his superior Calvary numbers in the battle. This even more ironically was due to the Scipio's success in alliance with Masinissa, while Hannibal failed to ally the Italian allies of Rome. Conclusion Hannibals poor judement of Rome and his own allies, as well as the lack of reinforcement lead to the decline of one the most powerful and wealthiest nations in histroy. ...read more.