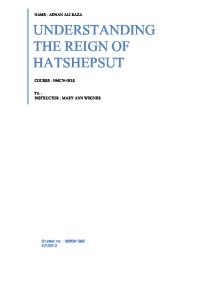 Hatshepsut. Hatshepsut, the 5th King of the 18th dynasty, however stands out as an ambiguous personality, a rare yet prominent female ruler in a history dominated by men. My focus is to establish how her reign is understood, her accomplishments, and her

NAME : ADNAN ALI RAZA UNDERSTANDING THE REIGN OF HATSHEPSUT COURSE : NMC344H1S TA : INSTRUCTOR : MARY ANN WEGNER Student no. : 995681882 2/7/2012 The history of Egypt is an intriguing collage of triumphant warriors, battlefield tacticians and imperialist transgressors. Hatshepsut, the 5th King of the 18th dynasty, however stands out as an ambiguous personality, a rare yet prominent female ruler in a history dominated by men. My focus is to establish how her reign is understood, her accomplishments, and her relationship to Thutmose III. Hatshepsut was born as the result of the union between the King Tuthmose I and his 'principal wife', Amose. The 18th dynasty laid great importance to the role of the queen, giving her special rights in assigning priestly duties and it is not farfetched to assume that the queens of the dynasty held considerable control over certain matters of state and official appointments. The principal wife was seen as a repository to regality as succession to the throne was seen to pass to the progeny of the principal wife(Redford 1967:71). Since Tuthmose did not have any male successors from Amose, the succession passed on to Tuthmose II, his son from a lesser wife, and was legitimized through marriage to Hatshepsut, his half sister and subsequent 'principal wife'. Hatshepsut proved to be a strong willed woman, well versed in matters of the state, probably owing to her upbringing, and exercised many stately duties even as queen. ...read more.

In a lot of cases the throne was passed on to an able military general in the absence of a male heir, as in the case of Amenhotep passing on his crown to Thutmose I. We know that the 18th dynasty gave great importance to the cult of Amun and the seed of the king was known to pass through to the principal queen through the god Amun, hence the queen's primary title, 'god's wife'(Redford, 1967:71). This fact was employed in a number of propaganda reliefs by Hatshepsut. Most important among these was the scene at Deir-al Bahri, depicting a union between Hatshepsut's mother Amun and her mother Ahmose, and leading to the 'divine birth' of Hatshepsut. This concept of divine birth was later employed by Amenhotep III in his temple at Karnak(Shaw, 2000:267). Given the dichotomy in the interpretation of the two cases, whether this was ingenuity or part of Hatshepsut or part of the ruler's divine birth cycle is unclear. Another important inscription is recorded at Deir-al Bahri, where the speaker, possibly Thutmose I, speaks of passing his throne to Hatshepsut. This inscription is corroborated by a relief showing Hatshepsut's coronation under the presence of Amun, at the Red Chapel in Karnak. Hence, through adequate use of the beliefs of the time and the fact that she was of direct royal descendancy, she managed to give both divine and royal legitimacy to her rule(Redford 1967:82). ...read more.

It is unlikely that her death was anything but natural. The erasures were carefully undertaken, such as the ones of her coronation scenes, and the obelisks at Karnak were carefully walled up. Had he sought revenge or been directed by hatred, Thutmose III could have definitely obliterated any sign of Hatshepsut from history, but he did not, and most of the erasures came later in this sole reign. The images of Hatshepsut as king were altered to but those as queen were not harmed either(Robins 1993:51). This may have been a tact directed to conform with ma'at: 'the natural order of the world'(Robins 1993:50), or an action borne out of political necessity, we cannot be certain. It is however certain that Hatshepsut did become a complete king, active trading building while keeping Egypt secure.. Her many depictions as a 'masculine' king, her decision to have her tomb in 'the valley of kings'(Clayton 1994:107), and the number of inscriptions and reliefs that have been found, corroborate the fact. How the events transpired, and what motivated the parties involved to act the way they did, however, remains open to debate. SOURCES CITED: * Clayton, P. Chronicle of the Pharaohs (London, 1994): 104-106. * Gardiner, A. Egypt of the Pharaohs (Oxford, 1961): 180-191. * Redford, D. "The Reign of Hatshepsut," in History and Chronology of the Eighteenth Dynasty of Egypt (Toronto, 1967): 57-87. * Robins, G. Women in Ancient Egypt (Cambridge, 1993): 45-52. * Bryan, B. "The Eighteenth Dynasty before the Amarna Period," in Shaw, I.(ed.), The Oxford History of Ancient Egypt (Oxford, 2000): 218-271 ?? ?? ?? ?? RAZA-Page | 1 ...read more.