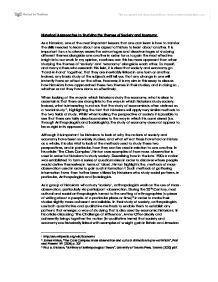 Historical Approaches to studying the themes of 'Society' and 'Economy'

Historical Approaches to Studying the Themes of Society and Economy As a historian, one of the most important lessons that one can learn is how to transfer the skills needed to learn about one aspect of history to learn about another. It is important for us to always assess the advantages and disadvantages of studying different themes alongside one another in order for us to gain the most effective insight into our work. In my opinion, nowhere can this be more apparent than when studying the themes of 'society' and 'economy' alongside each other. To myself, and many others who research this field, it is clear that society and economy go 'hand-in-hand' together; that they are inevitably linked in one form or another. Indeed, any basic study of the subjects will tell you that any change in one will instantly have an effect on the other. However, it is my aim in this essay to discuss how historians have approached these two themes in their studies, and in doing so, whether or not they have done so effectively. When looking at the ways in which historians study the economy, what is clear to ascertain is that there are strong links to the ways in which historians study society. ...read more.

This trend can be seen as a result of both the equal rights movements of the 1960s that worked to expose historical processes of oppression7, and the emergence of new theoretical frameworks that focus upon humans' social identity. Most contemporary theories are largely influenced by the post-World War II intellectual movements of structuralism and post-structuralism, with these movements asserting human identity as the product of cultural and historical systems. The notion of socially and historically constructed identities has a particular significance for contemporary academics engaged in the critical study of race. In their highly influential essay, "Racial Formation," Michael Omi and Howard Winant assert: "Although the concept of race invokes biologically based human characteristics, selection of these particular human features for purposes of racial signification is always necessarily a social and historical process."8 The influence of structuralism and post-structuralism on feminist and Marxist theorists has produced similar studies of the historical and social construction of gender and class differences as are common in discussions of race. Many contemporary theorists view ideas of masculinity and femininity as socially determined and as connected to the workings of power in society. Given the historical oppression of women and people of colour, it is often impossible for historians to speak of race and gender without addressing corresponding issues of class difference and economic inequality. ...read more.