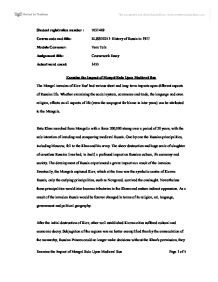 History of Russia. Examine the Impact of Mongol Rule Upon Medieval Rus

Student registration number : 7631469 Course code and title: RUSS10251: History of Russia to 1917 Module Convener: Vera Tolz Assignment title: Coursework Essay Actual word count: 1433 Examine the Impact of Mongol Rule Upon Medieval Rus The Mongol invasion of Kiev Rus' had various short and long-term impacts upon different aspects of Russian life. Whether examining the social system, commerce and trade, the language and even religion, effects on all aspects of life (even the scapegoat for blame in later years) can be attributed to the Mongols. Batu Khan marched from Mongolia with a force 200,000 strong over a period of 20 years, with the sole intention of invading and conquering medieval Russia. One by one the Russian principalities, including Moscow, fell to the Khan and his army. The sheer destruction and huge scale of slaughter of countless Russian lives had, in itself, a profound impact on Russian culture, it's economy and society. The development of Russia experienced a grave impact as a result of the invasion. Eventually, the Mongols captured Kiev, which at the time was the symbolic centre of Kievan Russia, only the outlying principalities, such as Novgorod, survived the onslaught. Nevertheless these principalities would later become tributaries to the Khans and endure indirect oppression. As a result of the invasion Russia would be forever changed in terms of its religion, art, language, government and political geography. ...read more.

Undoubtedly Moscow saw the most profound impact from Mongol rule. After it was founded, Moscow remained an insignificant town for over a century. Although Moscow had huge opportunities for trade and commerce with other lands due to its convenient geographic location on the Moscow river, which in turn connects to the Oka and Volga River, the potential of its situation was neither realised nor exploited. The rise of Moscow was a direct result of the Mongol onslaught. Hordes of refugees began to arrive from the devastated southern part of Russia, particularly Kiev, after the destruction of the various principalities. (Riasanovsky, p. 109). Moreover, the actions of the Muscovite Princes, which pleased the Khans, helped Moscow to rise as the centre of power. One of the more notable actions were that of Prince Ivan I of Moscow. He won the favour of the Khan when he subdued the rebellion in Tver. To show his appreciation, the Khan granted Ivan I more power, and with this, Moscow was furthered in its prominence and power. After being put in charge of tax collecting by the Khan, Moscow and the Prince grew wealthier as they kept some of the tax for the benefit of the state. As Moscow grew wealthier, its authority of several principalities also increased through being the main tax collector. These decisions by the Khans of the Mongol rule had huge positive and long term effects, significantly helping Moscow in its rise to power and to what we know Moscow to be today. ...read more.

Various institutions like this, brought to Russia by the Mongols, were transformed to meet Russian needs over time and lasted for hundreds of years even after the Mongol rule had ended. These greatly changed the development and expansion of Russia and determined the course of development Russia would take. When we consider the evidence, the Mongol invasion and rule had numerous impacts on medieval Russia, ranging from political, social and religious aspects of Russian life and society. These impacts were both positive and negative, short term and long term. Impacts such as the growth of the Orthodox Church were evidently positive on the life of Russian people, whilst other aspects, such as the elimination of the Veche system and centralization of power had adverse effects on the wide spread of government for the various principalities. The long term impacts of the Mongol rule are still evident today, through the influences on the Russian language and the government. Without the rule and invasion, many aspects of Russia, such as religion and politics would greatly differ from what they are now. Through the Mongol influences, it can be seen that maybe Russia became a more Asian nation as the Mongols employed many ideas for economy and government from what they had seen in China. Nevertheless, the link between Russia and Europe was upheld due to the establishment of the Christian faith in Russia. It was the Mongol invasion, perhaps more than any other historical event, that shaped Russia and the capital Moscow into what we see today. ...read more.