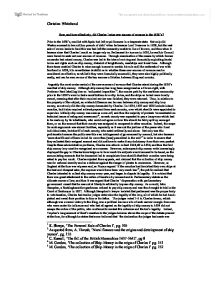 How, and how effectively, did Charles I raise new sources of revenue in the 1630s?

How, and how effectively, did Charles I raise new sources of revenue in the 1630's? Prior to the 1630's, conflict with Spain had left royal finances in a desperate state. Not only did Weston succeed to two million pounds of debt1 when he became Lord Treasurer in 1628, but the vast sale of crown lands to fund this war had left the monarchy unable to live of its own, and thus when it became clear that Charles I could no longer rely on Parliament for income in 1630, he and his Council were forced to seek out new sources of revenue. Through examination of the means by which former monarchs had raised money, Charles was led to the idea of reviving and financially exploiting feudal levies and rights such as ship money, distraint of knighthoods, wardships and forest fines. Although these taxes enabled Charles to raise enough income to sustain his rule until the outbreak of war with Scotland in 1638, it is nevertheless doubtful as to whether these new sources of revenue can be considered as effective, as whilst it they were financially successful, they were also highly politically costly, and can be seen as one of the key sources of friction between King and country. Arguably the most controversial of the new sources of revenue that Charles raised during the 1630's was that of ship money. Although ship money has long been recognised as a Crown right, with Professor Bard labelling it as an 'antiquated imposition'2, the monies paid by the maritime community prior to the 1630's were in fact a contributions to a ...read more.

Although the fine was met with some direct opposition, this was not largely in regards to its legality, but due to the amount that was charged (a minimum fine of �25 was demanded from JP's, and �10 from gentry)and because in 1626 those fined had not been worth the �40 that made them liable to pay. As a result, much of the gentry felt that they were being charged too much for an honour that they would not normally be considered for due to their birth or total wealth, leading some to complain or refuse to pay. In response to these defaulters, Charles sent personal royal letters to noblemen who headed up the commission in their counties expressing his disappointment and thus urging them to greater effort, and instructed his attorney to proceed against sheriffs who were not collecting the fines strenuously enough. The crude manner in which Charles rigorously enforced distraint of Knighthoods can be seen as a major factor in the distancing of King from country; even Clarendon, a firm royalist labelled Knighthood fines as 'ill husbandry' and 'most grievous'8 due to the obvious manner in which it was exploited simply to bring in revenue. Although by April 1635, knighthood fines had brought in �173,537; 'the largest single source of extraordinary revenue other than the loan and the sale of crown lands'9, meaning that it was a success in terms of revenue collected, in terms of the damage done between Charles and his subjects, Knighthood fines can be seen as a step on the road to collapse; as Leonard argues, it 'increased discontent without providing ...read more.

Overall it is evident that during the 1630's, Charles main means of raising new sources of revenue was via the revival and exploitation of obsolete laws, combined with the extensive application of existing laws. As Sharpe argues, instead of looking forward or across overseas to continental practice, Charles looked to the past for inspiration. However, this method of increasing income was highly politically costly, not least because the legality of many of these revived feudal fines was widely disputed, and without Parliament to settle the matter, debate could not be halted. A key example of this is ship money; despite the King winning his case against Hampton in a legal court, the public remained dissatisfied with this outcome. Although it is clear that these sources of revenue were effective in that they enabled Charles to raise enough income to sustain his rule until the outbreak of war with Scotland in 1638, they must also be recognised as one of the key reasons for the breakdown between King and country, as many of the fines were crudely implemented and left the impression that Charles was abusing his prerogative power, to the extent that even royalists such as Clarendon and Wentworth voiced criticism. Therefore, whilst Charles gained financially from these new sources of revenue, his political standing suffered hugely as a result, and thus it must be recognised that Caroline fiscal expedients were truly 'false mines for obtaining money'21, because their political cost was so much higher than their financial value. ...read more.