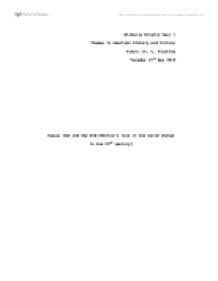 How and why did America's role in the world change in the 20th century?

755)Roosevelt wanted to avoid war with Japan so rather than using military might to solve the problem, America used economic tactics to try to persuade the occupiers to leave. America continued to stay aloof from European affairs. A series of Neutrality Acts were passed inbetween 1935 and 1937, appeasing supporters of the isolationist policy. The Spanish Civil War prompted an amendment to the Neutrality Acts, stating that the legislation would also cover civil wars. (Boyer, Enduring Vision, p. 753) Roosevelt was concerned with European affairs, although maintaining the position of neutrality; America encouraged negotiations within Europe to deal with the increasing problem of Germany and Italy. FDR recognized the emergence of Germany as a military power and sought to increase the United States military. America's involvement in the Second World War started in 1941 and was initially in the form of economic concessions to the Allied countries, in particular Great Britain. This involvement was next extended to supporting British naval vessels patrolling the Atlantic. Early US involvement in the European war was kept to a minimum. America occupied Greenland and Iceland in order to prevent them falling to Axis forces. ...read more.

America increased its military presence in South Vietnam, continuing to help the south overcome the north. After US naval ships were attacked by the North Vietnamese in 1964, President Johnson gained permission from congress to use any action necessary and US troops were officially sent into Vietnam. The events of the last century display America's changing role in the world. It is evident that America adopted a policy of neutrality and isolation early in the century. Events in Europe and Asia called for America to reconsider its position in the world. After the end of the Second World War changes to America's world role can be observed; American policy changing from isolation to being concentrated on the containment of communism. America's traditional approach of non-intervention evolved with the containment policy to that of pro-intervention. The collapse of the Soviet Union has eradicated the majority of America's concern with communism. Recent events in the former Yugoslavia and in the Gulf have called for fresh debate on America's role in the world. The idea of America being the policemen of the world has been put forward on many occasions; it appears that America's new stance on the War on Terror and global peacekeeping efforts are clearly indicating that the United States has adopted an interventionist policy with regards to its role in the world. ...read more.