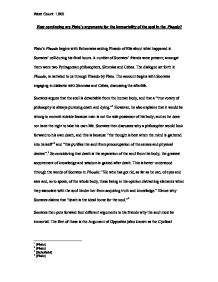 How convincing are Platos arguments for the immortality of the soul in the Phaedo?

How convincing are Plato's arguments for the immortality of the soul in the Phaedo? Plato's Phaedo begins with Echecrates asking Phaedo of Elis about what happened in Socrates' cell during his final hours. A number of Socrates' friends were present; amongst them were two Pythagorean philosophers, Simmias and Cebes. The dialogue set forth in Phaedo, is narrated to us through Phaedo by Plato. The account begins with Socrates engaging in dialectic with Simmias and Cebes, discussing the afterlife. Socrates argues that the soul is detachable from the human body, and that a "true votary of philosophy is always pursuing death and dying."1 However, he also explains that it would be wrong to commit suicide because man is not the sole possessor of his body, and so he does not have the right to take his own life. Socrates then discusses why a philosopher would look forward to his own death, and this is because "the thought is best when the mind is gathered into herself"2 and "this purifies the soul from preoccupation of the senses and physical desires".3 So considering that death is the separation of the soul from the body, the greatest acquirement of knowledge and wisdom is gained after death. This is better understood through the words of Socrates in Phaedo: "He who has got rid, as far as he can, of eyes and ears and, so to speak, of the whole body, these being in his opinion distracting elements when they associate with the soul hinder her from acquiring truth and knowledge." ...read more.

Plato believes that this knowledge is pre-natal, and so through dialogue argues that if man has a priori knowledge, the soul must exist before the body. This argument however does not prove that the soul exists immortally. It provides a logical argument that soul can exist before birth, it could also exist after death but there is no argument for its immortality. The soul could exist after many deaths, millions of deaths, and possibly even after the extinction of human race as we know it to be, but that does not mean the soul can exist eternally. It could also be argued that it is impossible for someone to recollect knowledge such as the time of the fall of Rome unless they have learned of it, or were present at the time. This theory of having prior knowledge would only work with concepts like logic and mathematics. However, Plato believed that logic and mathematics were the only types of true knowledge (with the exception of mystic insight). Cebes was not convinced by this argument for the immortality of souls, so Socrates presents his third argument, known as the Affinity Argument. For this argument Socrates works with the assumption that there are two types of existences: the seen and the unseen. He says that the seen is an existence susceptible to change and the unseen is not. His next point that there is a part of us that represents the body and another part representing the soul, and therefore concludes that the body is changing (as it is seen) ...read more.

Socrates' surrounding friends find this final argument to be irrefutable and logically valid. Plato's approach to proving the immortality of the soul seemed to be to provoke the reader to question and object. This he did by presenting the Cyclical Argument, the Theory of Recollection and the Argument of Affinity. It would be obvious to say that these first three arguments are not wholly convincing, as Socrates' interlocutors criticised the arguments. Plato carefully explores the existence of the soul in different worlds in an attempt to take the reader through the steps he has taken to come to his final argument and conclusion. The arguments may also serve the purpose of showing the reader examples of invalid arguments and false premises. Each of the first three arguments manages to prove the existence of the soul, the existence of the soul before birth and death (though the latter is less convincing) but none manage to prove the immortal existence of the soul. The final argument is most definitely the most convincing, and it can be seen that Plato knows this too. He uses the Theory of Forms in last argument, which he believes to be the most certain of all his theories. A factor concerning all four of Plato's arguments is that one must accept a number of assumptions for the arguments to be valid. If the assumptions are unproven and eventually turn out to be invalid, then even Plato's final and most convincing argument would be regarded as invalid. ...read more.