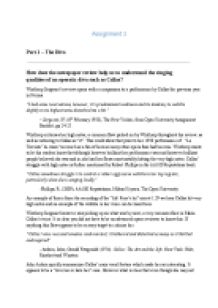 How doesWinthrop Sargeants newspaper review help us to understand the singing qualities of an operatic diva such as Callas?

﻿Assignment 3 Part 1 ? The Diva ________________ How does the newspaper review help us to understand the singing qualities of an operatic diva such as Callas? Winthrop Sargeant?s review opens with a comparison to a performance by Callas the previous year in Norma. ?I had some reservations, however; it?s predominant reediness and its tendency to wobble slightly in its highest notes disturbed me a bit.? ? Sargeant, W; (6th February 1958), The New Yorker, from Open University Assignment Booklet, pp 24-25. Winthrop criticises her high notes; a common flaw picked on by Winthrop throughout his review; as well as referring to Callas as ?it?. This could show that prior to her 1958 performance of ?La Traviata? he wasn?t as much as a fan of hers as many other opera fans had become. Winthrop wants to let his readers know that although however brilliant her performance was and however brilliant people believed she was and is; she had her flaws most notably hitting the very high notes. ...read more.

?Callas' voice was and remains controversial; it bothered and disturbed as many as it thrilled and inspired? - Ardoin, John; Gerald Fitzgerald (1974). Callas: The Art and the Life. New York: Holt, Rinehart and Winston John Ardoin quickly summarizes Callas? main vocal feature which made her so interesting. It appears to be a ?love her or hate her? case. However what is clear that even though she may not have been the favourite opera singer of all opera critics; she was highly respected by them. Despite comparing to her previous perhaps under par performances, the opening of the second paragraph Winthrop writes: ? ? and this time, I must say, she left me in complete agreement with the most fervent of her admirers, who bellowed and thundered their approval after every aria? ? Sargeant, W; (6th February 1958), The New Yorker, from Open University Assignment Booklet, pp 24-25. ...read more.

Here Robert explains that Maria Callas had a more unique way of drawing the audience into her performances. Coinciding with Winthrop?s review, this is what made her unique and it was this part of her that made her stand out from the rest of the opera singers around the world; it could be said that it was ability that brought her reputation as a diva. To conclude; the newspaper review gives an accurate account of her performance and singing ability from that evening as nothing but spectacular, far greater than her pervious performances over the years. Despite some of her vocal qualities not being perfect, these ?flaws? were now beginning to be accepted as a part of her performance. In her inability she has vocally compared to other opera artists, she more than makes up for with the performance and acting of the aria making giving her the unique ability to capture the audience more so than an opera singer with more finer vocal abilities. ...read more.