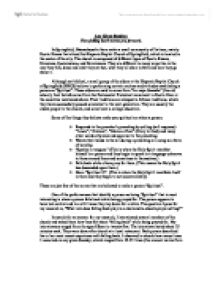 How falling back moves you forward.

Any Given Sunday: How falling back moves you forward. In Springfield, Massachusetts there exists a small community of Latinos, mainly Puerto Ricans that attend the Hispanic Baptist Church of Springfield, which is located in the center of the city. The church is composed of different types of Puerto Ricans, Peruvians, Guatemalans, and Dominicans. They are different in many ways like in the way they talk, dress and what they eat but, what they all share is faith and how they go about it. Although not biblical, a small group of the elders at the Hispanic Baptist Church of Springfield (HBCS) believe in performing certain routines and attitudes establishing a person as "Spiritual". These elders are said to come from "La vieja Guardia" (the old school), their beliefs come from the Pentecostal Protestant movement in Puerto Rico or the countries mentioned above. Their traditions are steeped in African traditions, which they have successfully passed somewhat to the next generation. They are usually the oldest people in the church, and some have a college education. Some of the things they believe make you spiritual are when a person: * Responds to the preacher's preaching by yelling (call response) "Amen", "Alleluia", "Gloria a Dios" (Glory to God) and many other words of praise and approval to the preaching. * Waves their hands in the air during a preaching or a song as a form of worship. ...read more.

I was busy thinking about what people were thinking about me." ~Koppel Verma, 24 year old Consultant Having experienced this myself, I understand where my interviewees were coming from. In my years in church I seemed confused about what it meant to fall back. Later on in life I understood the various meanings behind "falling back" and how doing it or not doing it can change your position within the church community. The patterns I have observed in my research of "falling back" usually consist of a person being prayed for. When the person saying the prayer lays their hand on the person's head it usually implies the person is going to fall down. Now this is not highly crystallized within the community, not everyone believes the person being prayed for is going to fall back, but somehow it is assumed that if they are being blessed they will fall and if they are "spiritually -in- tuned"(To be "spiritually -in- tuned" meaning they are righteous). Now if the person does not fall back, there are many implications that the elders and other members of the church often say to explain why they did not fall back.. Here are some examples of what the elders say if someone does not fall back: * "They are not righteous." * "They are being resistant towards God's will." ...read more.

Another specific cultural practice that takes place within the production of falling back is when someone falls back and lays on the floor. This act is like being in a trance. One of my interviewees, Jennifer Ca�izares a Communication student mentioned the following about being in a trance, "All I know is that the preacher's hands felt like...weird, like fire. He touched me and I fell and I didn't know what happened." This trance-like act when falling is cultural in that it stems from the African influence in Latino cultures. In Daniel and Smitherman's article "How I got over," they describe that the call response that characterized many African-American churches come from pre and post slavery African religious performances. The performances of call response and other performances that are from African descents are also seen in HBCS, but are not considered African. Many elders in HBCS believe that such occurrences are faithful to the experiences held by Jews and early Christians. As I analyzed the significance of falling back I concluded that one of the normative rules for being considered "spiritual" is falling back. If one is being prayed for and wants to be considered "spiritual" it is preferred that one falls back. If one is able to achieve the goal of being spiritual the elders place them in a higher place within the hierarchy in the church. The goals achieved are being considered "spiritual," being part of a community and in a sense moving up the spiritual ladder. Spiritually the goals are to achieve connection with God and receive peace. ...read more.