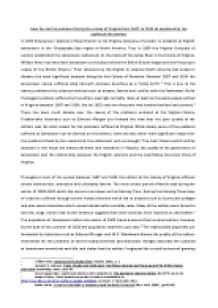 How far can the problems facing the colony of Virginia from 1607 to 1624 be explained by the quality of the settlers?

﻿How far can the problems facing the colony of Virginia from 1607 to 1624 be explained by the quality of the settlers In 1606 King James I granted a Royal Charter to the Virginia Company of London to establish an English settlement in the Chesapeake Bay region of North America. Thus in 1607 the Virginia Company of London established the Jamestown settlement on the banks of the James River in the Colony of Virginia. William Kelso has described Jamestown as the place where the British Empire began and the first proper colony of the British Empire.[1] Prior attempts by the English to colonise North America had ended in disaster the most significant example being the lost Colony of Roanoke. Between 1607 and 1624 the Jamestown colony suffered what Kenneth Andrews describes as a ?sickly birth?.[2] This is due to the various problems the colonists endured such as disease, famine and conflict with the Powhatans. By far the biggest problem suffered by the settlers was high mortality rates; at least six thousand people settled in Virginia between 1607 and 1624, but by 1625 only one thousand two hundred settlers had survived.[3] There has been much debate over the causes of the problems endured at the Virginia Colony. ...read more.

It is fair to say that the Virginia Company was more interested in obtaining these goals and making a profit rather than ensuring the welfare of the colonists. This consequently as Grizzard effectively demonstrates led to the settlers wasting time mining Virginia pyrite (fool's gold) rather than harvesting crops.[13] In addition Williams states that in the early years of Jamestown the settlement was poorly governed.[14] This is true to an extent. The site chosen for the Jamestown settlement was a poor choice due to its swamp environment and lack of fresh water supply. Jamestown also went through a series of poor and incompetent Governors such as Edward Wingfield who failed to maintain order and impose discipline on the settlers. Wingfield was also accused of favouritism and spent a short time in jail after being removed as Governor. However under governorship of John Smith between September 1608 and August 1609 things improved. Smith established martial law and implemented the rule ?he who shall not work, shall not eat? which imposed discipline among the colonists and encouraged the settlers to work in order to survive.[15] Smith has often been praised by historians such as Kupperman for his contribution to the survival of the Jamestown settlement.[16] In the next few years the Jamestown settlement went through various governors such as Thomas Gates and Thomas Dale. ...read more.

Furthermore the settlers antagonised the Powhatans through naively expecting the Powhatans to supply them with food and through expanding into Powhatan territory, which led to hostility and violence between the two groups and threatened the survival of Jamestown. However this does not tell us the full story and there were various other significant factors beyond the settler's control. The main example of this the drought between 1606 and 1612 which crippled the settlers ability to grow food for themselves, which was through no fault of their own. This was clearly the main reason for the emergence of the Starving Time. In addition the Virginia Company were more interested in making a profit than the welfare of the colonists. The need to make profit forced the settlers to fous on the search for gold or a north west passage rather than staying alive. Furthermore the settlers were weakened by poor and incompetent governors at Jamestown such as Wingfield and Percy who failed to install order and discipline on the settlement. Overall it is therefore clear to see that the quality of the settlers was a fairly significant reason for the problems endured at Jamestown however there were more significant reasons beyond the settlers control such as drought and poor governance by both the Virginia Company and individual Governors of Jamestown. ...read more.