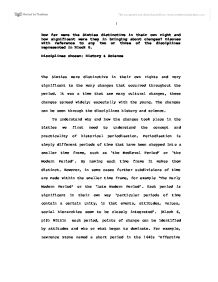 How Far Were The 60s Distintive In Their Own Rights

How far were the Sixties distinctive in their own right and how significant were they in bringing about changes? Discuss with reference to any two or three of the disciplines represented in Block 6. Disciplines chosen: History & Science The Sixties were distinctive in their own rights and very significant to the many changes that occurred throughout the period. It was a time that saw many cultural changes, these changes spread widely; especially with the young. The changes can be seen through the disciplines history and science. To understand why and how the changes took place in the Sixties we first need to understand the concept and practicality of historical periodisation. Periodisation is simply different periods of time that have been chopped into a smaller time frame, such as 'the Medieval Period' or 'the Modern Period'. By naming each time frame it makes them distinct. However, in some cases further subdivisions of time are made within the smaller time frame, for example 'The Early Modern Period' or the 'Late Modern Period'. Each period is significant in their own way 'particular periods of time contain a certain unity, in that events, attitudes, values, social hierarchies seem to be closely integrated'. ...read more.

Swearing had become apparent in many programmes in the Sixties such as in Cathy Come Home there are several usages of the word 'bloody' as well as one 'bugger off'. The character Alf Garnet in Till Death Us Do Part used racist terms such as 'coon'. These programmes showed that censorship had change drastically compared to the very different 'plummy-sounding standard "BBC English" of the 1950s television'. (Audio Visual Notes 2, p31) 'Social realism' was seen in such programmes as Up The Junction and Cathy Come Home as they were filmed on real locations, such programmes showed scenes of men in a pub with women mingling with them. This showed that women were no longer confined to the home doing daily house chores. Each programme shown in TV25 deals with controversial social issues. Till Death Do Us Part shows controversial issues by the means of comedy and satire. Racism is the issue in once clip and the other is based on Britain's loss of world power status. Homelessness and single parenthood are the issues in Cathy Come Home this is presented through 'docu-drama'-the technique of a fictional story presented in a realistic documentary setting. ...read more.

Moving on, in the late Sixties one of the major allegations against science by critics was 'that it had become heavily militarised ... [and] dedicated to the development of weapons of mass destruction'. (Book 6, p75) Radical critics were not the only ones who spoke about this, the US President and five-star General, Dwight D Eisenhower also voiced their concerns. Senior members of the Democratic Party agreed with his concerns. However the military disagreed. Chemical warfare in Vietnam began protests at MIT in the late Sixties. Due to television, and journalists in the war zone, stories and images of the 'death and destruction' in Vietnam were broadcast in homes throughout the world. The impact was remarkable. MIT started their protest this led to forty-seven academics signing a statement that viewed their opposition to the Vietnam War in 1969. Chemical warfare effected everyone world wide, even people in the world of literature, Rachel Carson published her book Silent Spring based on the disastrous effect In conclusion, by looking briefly at only two disciplines we can see that the Sixties were significant where changes were concerned as people's attitudes altered drastically, and by the use of the media the likes of sex and abortion was broadened where the government was forced to alter their views and listen to the majority of people. ...read more.