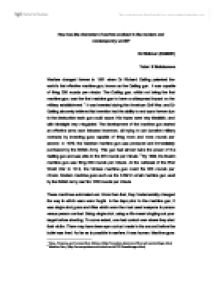 How has the character of warfare evolved in the modern and contemporary world?

How has the character of warfare evolved in the modern and contemporary world? Ed Skinner (0349801) Tutor: E Balabanova Warfare changed forever in 1861 when Dr Richard Gatling patented the world's first effective machine gun, known as the Gatling gun. It was capable of firing 200 rounds per minute. The Gatling gun, whilst not being the first machine gun, was the first machine gun to have a widespread impact on the military establishment.1 It was invented during the American Civil War, and Dr Gatling sincerely believed his invention had the ability to end wars forever due to the destruction each gun could cause. His hopes were very idealistic, and with hindsight very misguided. The development of the machine gun started an effective arms race between inventors, all trying to win lucrative military contracts by inventing guns capable of firing more and more rounds per second. In 1879, the Gardner machine gun was produced and immediately purchased by the British Army. This gun had almost twice the power of the Gatling gun and was able to fire 370 rounds per minute.2 By 1889, the Maxim machine gun was firing 500 rounds per minute. At the outbreak of the First World War in 1914, the Vickers machine gun could fire 600 rounds per minute. ...read more.

The technology and experience gained by the n**i scientists would later be harnessed by the US as it developed its first ICBM a few years later. It is an obvious statement to make, but warfare and its character has evolved tremendously since the end of World War 2. World War 2 resulted in approximately 25 million service men and women losing their lives. About 30 million civilians are estimated to have been killed.5 Warfare, as it existed then was very people intensive and high casualties were a definite feature. However, World War 2 to some extent did mark something of a watershed, as it featured the development of more advanced machines of war. It was these developments which would lead to the eventual dropping of two nuclear weapons. Hiroshima was bombed at 8:15 in the morning local time on the 6th of August 1945.6 Nagasaki was bombed at 11:02 the three mornings later.7 These attacks led to the unconditional surrender of Japan two days later, and marked the end of hostilities in the Far East. They also, in many ways, marked the dawn of a new age. The first nuclear weapon was exploded on the 16th of July 1945. ...read more.

For them, war is becoming the display on a computer screen. They are the green dots, and the enemy are the red dots. War is being removed from actual experience, at least for those countries with the resources to develop such systems. Many countries do not, and Iraq was one of them in the early 1990's. It must be remember, that each dot on the computer screen represents more than a machine, it represents the person inside as well. In modern warfare, the machine is now as important the soldier was 60 years ago. These machines can often defend themselves automatically, for instance some planes are able to release anti-missile measures automatically without any input from the pilot. In 2001, George W Bush, the American President, declared war on terror. This was in response to the tragic attacks of September 11. The so called 'War on Terror' is a new type of war altogether. It is not a battle of one state versus another, and there is no front line. It may well be the taste of things to come. The US military is without doubt hugely powerful. And yet they are having heavy causalities inflicted on them in post Saddam Iraq by rebels using guerrilla tactics. The US is virtually invincible in a conventional war, yet by many reports is struggling to adapt to this new challenge. ...read more.