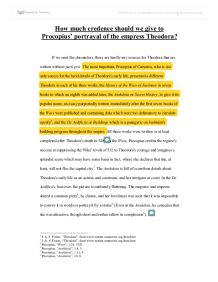 How much credence should we give to Procopius' portrayal of the empress Theodora?

How much credence should we give to Procopius' portrayal of the empress Theodora? If we omit the chroniclers, there are hardly any sources for Theodora that are written without parti pris. The most important, Procopius of Caesarea, who is our only source for the lurid details of Theodora's early life, presented a different Theodora in each of his three works, the History of the Wars of Justinian in seven books to which an eighth was added later, the Anekdota or Secret History, to give it its popular name, an essay purportedly written immediately after the first seven books of the Wars were published and containing data which were too defamatory to circulate openly1, and the De Aedificiis or Buildings which is a panegyric on Justinian's building program throughout the empire. All these works were written or at least completed after Theodora's death in 5482. In the Wars, Procopius credits the regime's success at suppressing the 'Nika' revolt of 532 to Theodora's courage and imagines a splendid scene which may have some basis in fact, where she declares that she, at least, will not flee the capital city3. The Anekdota is full of scurrilous details about Theodora's early life as an actress and courtesan, and her intrigues at court. ...read more.

Theodora knew how to be ruthless and no one should sentimentalise her. One source for the 'Nika' revolt reports that Justinian might have shown compassion for the nephews of Anastasius, Pompeius and Hypatius, the latter of whom the mob had chosen as their replacement for Justinian20, but Theodora did not approve of mercy where the security of the regime was in question. It was her will that Pompeius and Hypatius be put to death. Justinian might later restore their property to their heirs, but by then they were no danger to the regime21. Procopius does talk of her ruthless qualities, but to a much larger extent. He goes as far as saying that because of her murderous acts, both her and her husband were demons in human form22, with only vicious and malicious intentions. This is, undoubtedly taking her ruthlessness to new levels, and, again, must be taken with a considered amount of scepticism. Clearly she was ruthless and determined, because she enjoyed having such power in the imperial court, but she was not the monster that Procopius portrays in the Anekdota. She presented herself, however, in a different light: as the friend of the unfortunate. ...read more.

Procopius' Theodora is not presented as a masculine woman, or as transgressing or exceeding her sex; rather she is the epitome of "feminine", with all the limitations that implies to Procopius40. His unpleasant detailing of Theodora's activities in the Hippodrome is not softened by any tinge of romanticism - it is unmitigated venom. With his physical description of Theodora, Procopius shows the characteristics and limitations of his treatment of her41. Prejudiced, one-sided and biased as his presentation of her is, it sums up all that the empress Theodora meant to Procopius at the time. Therefore, as Procopius is the only real source for the whole of the life of the empress, the "Anekdota", or "Secret History" is hugely important in our understanding of Theodora, and so must be considered credible by modern scholars. However the biased and malicious views taken by Procopius mean that the "Anekdota" is not entirely reliable, and so caution and selection must be used in analysis. In his recounting of factual narrative, Procopius' version of events is accepted. However, it is when he considers Theodora's character and lifestyle that he assumes the mantle of a sensationalist tabloid reporter, and so in conclusion enough credence should be given to Procopian portrayal of Theodora to glean useful and accurate information from it, but enough scepticism and cynicism used to work through the bias and the venom of Procopius. ...read more.

This essay shows a good level of familiarity with Procopius' work and the different put forward in them. The student also shows a reasonable familiarity with the context of the works. the essay could be improved by making clearer use of the historiography on the topic and being more analytical.
4 stars.