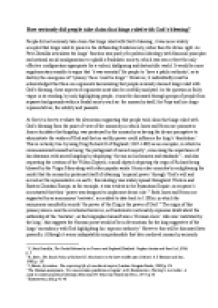 How seriously did people take claim that kings ruled with Gods blessing?

﻿How seriously did people take claim that kings ruled with God?s blessing? People did not seriously take claim that kings ruled with God?s blessing; it was more widely accepted that kings ruled to preserve the obfuscating feudal society, rather than for divine right. As Petit-Dutaillis articulates the kings? function was purely for political ideology with financial principles and national social amalgamation to uphold a feudalistic society; which was seen at best the only effective configuration appropriate for a violent, disfiguring and destructible world. It would be more supplementary sensible to argue that ?it was essential? for people to ?have a public authority?, as to destroy the emergence of ?tyranny? there ?must be kings?.[1] However, it undoubtedly must be acknowledged that there are arguments harmonizing that people seriously claimed kings ruled with God?s blessing, these aspects of arguments must also be carefully analysed. As the question is fairly vague in its wording, by only highlighting people, it must be discussed through groups of people from separate backgrounds within a feudal society such as: the monarchy itself, the Pope and his clergy representatives, the nobility and peasants. At first it is best to evaluate the altercation supporting that people took claim that kings ruled with God?s blessing from the point of view of the monarchy in which Jones and Herrin are promoters. ...read more.

Kantorowicz follows on to highlight the cleric’s incontestable elevated position as a ‘member of the Duchy’s high clergy’ indicating the close relationship between kings and church.[10] Jones also adds, by again using King Richard II of England as an example, that Richard increased expenditure to the church and allowed clergy administrators to take a more active role within his court which in return the church fêted Richard’s reign as being stoutly blessed by God, this put Richard in such a potent ‘absolutism’ which was never enjoyed before by any other previous English king. ‘The king sought more consistently the companionship of monks’ in the later part of his reign.[11] Although the process of how the church manipulated kings for power expansion has been explored, there are other examples of how the church questioned kings’ blessed rule. Following on with another factor was the potent influence the church had on the wide-ranging populace such as the nobles and peasants, not just on the monarchy itself. It must be understood that the Catholic Church was a universally important part of people’s way of life; being the centre of the community, in which taking into consideration, would sway peoples ideals on how serious they took claim that kings ruled with God’s blessing. ...read more.

As Pope Innocent III himself wrote to the barons, enforcing the Magna Carta, stating ?they should bear in mind their higher loyalty to God?.[20] Thus, it can be understood that people did not seriously take claim that kings ruled with God?s blessing but more with the blessing of his subjects, the church and nobles, to represent them politically, economically and socially at a national society. The monarchy used the conception of ruling with God?s blessing as a somewhat propaganda tool to use in their own favour to maintain supremacy over the lower classes. It would be best to tend to argue that although people from such areas as the church celebrated the notion of kings? divine rule it was purely political; the king was a matter of fact a vassal representing the church. Following on from this the lords and nobility had the capability to undermine the kings throne through constitutions and demands which became increasingly apparent through the later centuries, also evident with the peasant classes but to a lesser extent. Clearly it can be asserted that people took claim that the king upheld such an assertive prestige was because of his significance of maintaining a structured national society and to avow security; somewhat a necessity then a spiritual one. ...read more.