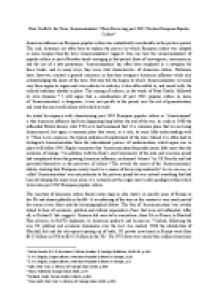 How Useful Is the Term Americanization When Discussing post 1945 Western European Popular Culture?

﻿How Useful Is the Term ?Americanization? When Discussing post 1945 Western European Popular Culture? American influence on European popular culture was undoubtedly considerable in the postwar period. This said, historians are often keen to explain the process by which European culture was adapted as more complex than the term ?Americanization? suggests. One can view the ?Americanization? of popular culture as part of broader trends emerging in that period; those of convergence, consumerism, and the rise of a new generation. ?Americanization? has often been employed as a metaphor for these trends, and in many ways they were vital characteristics of American culture. Historians have, however, reached a general consensus in that they recognise American influence while also acknowledging the limits of the term. Not only did the degree to which ?Americanization? occurred vary from region to region and even industry to industry, it also often added to, and mixed with, the cultural traditions already in place. This mixing of cultures, in the words of Petra Goeda, ?followed its own dynamic.?[1] I will argue that a consideration of post 1945 popular culture in terms of ?Americanisation? is dangerous; it was not specific to the period, runs the risk of generalisation, and it not the most useful idiom with which to work. ...read more.

Both historians pay homage to the ?confused?[15] response to American influence that ranged from acceptance to resistance, the generational divide, and the two way process of cultural adaptation. The stationing of GIs in West Germany introduced many to the American way of life, something that was rejected by the older generation and admired by the younger. One contemporary suggested that the Americans had ?opened up a fantastic new world to us.?[16] The Americans had arrived in an economically and socially challenged Germany in the 1940s and 50s and with the help of favourable exchange rates on the dollar were able to present an easier, freer way of life. While the younger generation were attracted by the allure of consumerism it was, as Hohn has argued, deeper than that; ?these more ephemeral qualities, not just the American consumer goods, that convinced many Germans that the Americans had brought the flair of the big wide world.?[17] What is critical here is the importance attributed to the younger generation. In aspiring to the American way of life they were distancing themselves from the more traditional culture of their elders, elders who had, as already discussed, long complained of ?Amerikanismus.?[18] It is within the European cinema industry that America was able to monopolise the cultural market most successfully. ...read more.