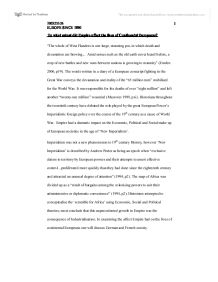 Imperialism. To what extent did Empire affect the lives of Continental Europeans?

To what extent did Empire affect the lives of Continental Europeans? "The whole of West Flanders is one large, steaming pot, in which death and devastation are brewing... Amid noises such as the old earth never heard before, a crop of new battles and new wars between nations is growing to maturity" (Emden 2006, p59). The words written in a diary of a European conscript fighting in the Great War conveys the devastation and reality of the "65 million men" mobilised for the World War. It was responsible for the deaths of over "eight million" and left another "twenty-one million" wounded (Mazower 1999, pxi). Historians throughout the twentieth century have debated the role played by the great European Power's Imperialistic foreign policy over the course of the 19th century as a cause of World War. Empire had a dramatic impact on the Economic, Political and Social make up of European societies in the age of 'New Imperialism'. Imperialism was not a new phenomenon to 19th century History, however 'New Imperialism' is described by Andrew Porter as being an epoch when "exclusive claims to territory by European powers and their attempts to assert effective control...proliferated more quickly than they had done since the eighteenth century and attracted an unusual degree of attention" (1994, p2). ...read more.

and the material profits which empire yielded were tiny. Brunshwig argues that French industry did not develop the "voracious demand for food and raw materials" nor the surplus of goods and capital for export (1985, pvii). Economically speaking France had no need for an Empire, Brunswig argues that the French painted the map blue not for economic reasons, but to "pump up their prestige as a great nation (1985, pvii)". Manipulated social imperialism' is the discourse of social historians; they see empire as a response to the rise of the working class which was becoming a threat to the old order; it was a manipulation of nationalism to divert a nation's attention from a socialist revolution. "It was at the beginning of the 19th century that the average man became conscious of the fact that he belonged to a nation" (1985, p20). The Franco-Prussian war ignited nationalistic feeling within society for both the German and the French nations: "war like nationalism spread among the people's of the continent to an extent which had never been so general and so passionately felt" (1985, p20). 'Hans Ulrich Wehler maintains that colonial expansion was a movement conceived by the German upper classes to "distract the working class from socialism" (1994, p32). ...read more.

There was a less grim side to Empire: Europeans were now bought into contact with "primitive and exotic cultures", which permeated into art, music and even into the science of Anthropology: Pablo Picasso influence's of Empire contributed to a "revolution in painting", and the sounds of oriental music could be heard at the "Great Paris International Exhibition of 1889", whilst the study of the people of the new Empires saw the "questioning of established moral and social values". However it is questionable whether it truly halted the rise of socialism, and were the benefits worth the expense of a world war? In examining the impact Empire had on the lives of continental Europeans it is imperative to consider the political, social and economic discourses. Whilst yes one can conclude that economically colonial empires had the potential to serve the needs of growing populations , industry and capital; however empires proved to be unprofitable and served only the governing conservative elite who sought to manipulate it's nation for its own purposes. Colonial Empires were an aggressive policy designed for the "prospect of conserving the status quo" at home and to further the political influence of the nation overseas; the ultimate price citisens paid was a war fought for 'King and country' rather than a war fought for the people; World war one "destroyed Europe" (2005, p6). ...read more.