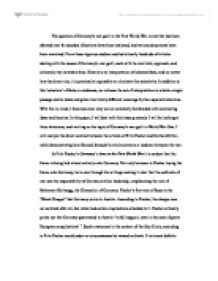 In Fritz Fischer's Germany's Aims in the First World War it is evident that the blame is being laid almost entirely onto Germany. Not only however is Fischer laying the blame onto Germany, he is also through his writings making it clear

The question of Germany's war guilt in the First World War is one that has been debated over for decades. Situations have been analyzed, and various documents have been examined. From these vigorous studies resulted virtually hundreds of articles dealing with the issues of Germany's war guilt, each with its own twist, approach, and ultimately the inevitable bias. History is an interpretation of selected facts, and no matter how hard one tries, it is practically impossible to eliminate this selectivity. In addition to this 'selection' of facts or evidences, we witness the act of interpretation in which a single passage can be taken and given two totally different meanings by two separate historians. With this in mind, it becomes clear why we are constantly bombarded with contrasting ideas and theories. In this paper, I will deal with this issue precisely. I will be looking at three historians, each writing on the topic of Germany's war guilt in World War One. I will analyze the direct contrast between the articles of Fritz Fischer and Gerhard Ritter, while demonstrating how Konrad Jarausch's article serves as a mediator between the two. ...read more.

Gerhard Ritter's article, A New War-Guilt Thesis?, is clearly a direct attack towards Fritz Fischer's Germany's Aims in the First World War. Even more so than presenting his own theories and arguments, Ritter seems to simply rebut those of Fischer. Throughout his entire article, Ritter with his arguments turns Fischer's theories into 'thesis history'. Ritter claims that what Fischer has done is purposefully searched for documents to prove his point 12. Time and time again, we witness Ritter making claims that Fischer is simply taking certain information and interpreting it in the favour of this thesis with obvious bias. For instance, Ritter directly attacks Fischer's interpretation of the fact that Bethmann Hollwegg wanted to prevent French chauvinism in order to keep the conflict localized. While Fischer states that this was a straightforward attempt on behalf of Hollwegg to break up the Entente, Ritter states, "Can one argue any more one-sidedly?" 13 While Ritter reads Tschirschky's wanting to avoid the impression that Germany is holding Austria back from war innocently, Fischer "interprets these additions as if they had intentionally pursued the objective of sabotaging the effect..." 14 Ritter claims that the additions were supposed to prevent the sensitivity and wariness of the Austrian government, who often enough felt bullied 15. ...read more.