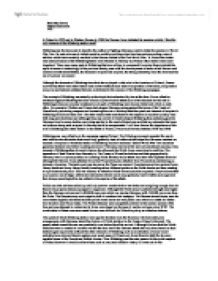 In Poland in 1939 and in Western Europe in 1940 the German Army defeated its enemies quickly. Was this only because of the Blitzkrieg tactics used?

In Poland in 1939 and in Western Europe in 1940 the German Army defeated its enemies quickly. Was this only because of the Blitzkrieg tactics used? Blitzkrieg was the term used to describe the method of fighting Germany used to defeat its enemies in World War Two. Its main aim was to defeat countries quickly avoiding a two front war and preventing a war of attrition which had eventually resulted in the German defeat in the First World War. In Poland the defeat was mainly because of the Blitzkrieg tactics used whereas in Norway and France other factors were more important. There were many parts to Blitzkrieg that were all key in a successful invasion these included the rapid advances in technology of the previous twenty years with the development of tanks called Panzers and modern aircraft called Stukas, the elements of speed and surprise, the strong leadership from the front and the use of a pincer movement. Although the elements of Blitzkrieg described above played a vital role in the invasions of Poland, France and Norway there were other factors such as the weakness and lack of cooperation of the allies, comparative army size and tactical mistakes that also contributed to the success of the Blitzkrieg campaigns. The concept of Blitzkrieg was actually quite simple but understood by few at the time. ...read more.

When the attack on Norway and Denmark began the allies found that their maps and information where insufficient in detail which made planning defensive strategies difficult. The Norwegian army was tiny compared to the German forces and still recovering from the Russo - Finish war however British and French armies where strong and certainly matched the strength of the technologically advanced German Army. The hierarchical system employed by the Germans reinforced strong leadership but unlike the British Army made sure all ranks were well informed of the importance of the effective implementation of tactics and the goals set. Battles were not won by the weight of numbers but by the superior skill, planning and organisation of the German Army. Tanks played an important part in modern warfare however Germany had 2, 700 tanks to the combined total of 3,200 British and French tanks. Nevertheless Germany still managed to secure a successful attack and in tactics and leadership skills France and Britain where far outclassed. Although many lives were lost at sea the attack on Norway was mostly successful however it was not defeated quickly by Germany. This successful attack despite the slow movement of German forces was due to a combination of reasons but mainly because of the inefficient and uncooperative French and British Forces. ...read more.

In Norway the vital element of speed was lost due to the bad weather and harsh conditions however the disorganisation of the allies meant they did not take advantage of this serious weakness in the German forces. Frances was defeated for similar reasons although there was no bad weather to slow down the rate of the Germans attack. Although Blitzkrieg was very effective in the campaigns it was used in if it had been used for a longer amount of time it is likely the allies would have realised the nature of German tactics and provided a more effective defence slowing the German attack. If the vital element of speed had been lost would blitzkrieg still have been valuable? It would still have been successful as it was not just the Blitzkrieg tactics used but also the efficient way they were applied that led to German victories. Due to the totalitarian nature of Germany at the time and the nationalistic attitude of its society made strong leadership (an important element of Blitzkrieg) work well in the German forces which meant that all elements of Blitzkrieg could be exploited to there full potential. Thus Blitzkrieg was a highly effective tactic employed by Germany in the campaigns against Poland and Western Europe. However its success was greatly increased by the weakness, lack of cooperation and stupidity of the allies which increased the effect of the efficient German forces in both carrying out and preparing to implement blitzkrieg tactics. Keira May Harvey History Coursework 11JL ...read more.