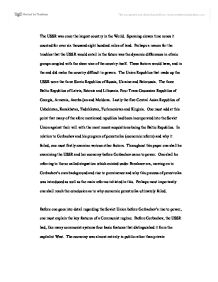 In relation to Gorbachev and his program of perestroika (economic reform) and why it failed, one must firstly examine various other factors. Throughout this paper one shall be examining the USSR and her economy before Gorbachev came to power.

The USSR was once the largest country in the World.  Spanning eleven time zones it counted for over six thousand eight hundred miles of land.  Perhaps a reason for the troubles that the USSR would entail in the future was the dynamic differences in ethnic groups coupled with the sheer size of the country itself.  These factors would have, and in the end did make the country difficult to govern.  The Union Republics that made up the USSR were the three Slavic Republics of Russia, Ukraine and Belorussia.  The three Baltic Republics of Latvia, Estonia and Lithuania. Four Trans-Caucasian Republics of Georgia, Armenia, Azerbaijan and Moldova.  Lastly the five Central Asian Republics of Uzbekistan, Kazakhstan, Tadzhikstan, Turkmenistan and Kirgizia.  One must add at this point that many of the afore mentioned republics had been incorporated into the Soviet Union against their will with the most recent acquisitions being the Baltic Republics.  In relation to Gorbachev and his program of perestroika (economic reform) and why it failed, one must firstly examine various other factors.  Throughout this paper one shall be examining the USSR and her economy before Gorbachev came to power.  One shall be referring to the so called stagnation which existed under Brezhnev era, moving on to Gorbachev’s own background and rise to prominence and why this process of perestroika was introduced as well as the main reforms initiated in this.  Perhaps most importantly one shall reach the conclusion as to why economic perestroika ultimately failed.

Before one goes into detail regarding the Soviet Union before Gorbachev’s rise to power, one must explain the key features of a Communist regime.  Before Gorbachev, the USSR had, like many communist systems four basic features that distinguished it from the capitalist West.  The economy was almost entirely in public rather than private ownership.  Power was highly centralized- the USSR was ruled by a single dominant Communist party. The state seemed to have all the power which made civil society very weak.  Lastly, the party was seeking to legitimize its rule by adhering to an official ideology of Marxism Leninism which committed the country to the path of Communism.  In order to further understand how Gorbachev came to power and the problems he faced, one must look at the system in which he inherited.  One shall be concentrating on the Brezhnev era to do this.  The Brezhnev era was based on a form of social contract with the fundamental principle being that if the state did not make excessive demands on the people, then the people should not make excessive demands on the state, such as calling for political participation or self governance.  In the area of Foreign Policy Brezhnev sanctioned the invasion of Czechoslovakia in 1968, the invasion of Afghanistan in 1979 and perhaps most importantly the Declaration of Martial Law in Poland in 1981 which ended the period of Détente with the West which led to the second Cold War.  With all of this going on in Foreign Policy under Brezhnev’s regime, one must look at the economic and social costs related to this in order to understand the economic system which Gorbachev inherited.  By the end of the Brezhnev era (1982) economic growth had fell to nearly zero.  This resulted in shortages of basic foods such as dairy products. Vegetables and meat.  One would have assumed that with these shortages the Government would pull together for the good of the people.  This was not the case.  The elite gained more and more privileges.  Special shops were opened for them which contained items that were difficult to find for the average Soviet person such as meat and consumer goods.  From the information provided it is little wonder that revolutionary circles were appearing and social unrest was on the increase.  Also during Brezhnev’s era defense spending accounted for an estimated 25 percent of total GNP, resulting in shortcomings in other areas.  A good example of this being in healthcare.  In 1965 spending on healthcare accounted for 6.5 percent of the state budget, however in 1985 this fell to just 5 percent.  It is clear from the information provided that Gorbachev was to inherit a deeply fragmented economic system, however one must not forget that it was not Gorbachev himself whom came to power after Brezhnev’s death in 1982.  Brezhnev was succeeded by Andropov whom himself died in 1984.  Andropov was then succeeded by Chernenko.  One would argue that it was Gorbachev’s links with Andropov that catapulted him into such an influential figure in Soviet politics.  As one has mentioned it was not until Chernenkos death in 1985 that Gorbachev became Head of State.  One must now move on to discuss the Gorbachev era, his economic reforms and why they failed.

As one has mentioned, Gorbachev inherited an extremely fragmented economic system.  Growth rates under Brezhnev were reduced to almost zero and social tensions were running high.  Gorbachev was seen as a committed “soviet patriot”.[1]  Milovan Dijas, a Montenegran observer of Soviet politics noted that “Gorbachev, unlike Brezhnev strikes me as a true believer and I cannot see him (consciously) presiding over the liquidation of Communism”.[2]  Another interesting quote relating to Gorbachev was made in 1989 by two leading Russian democrats Yurii Afanas’ev and Nikolai Shmelev.  They concluded that Gorbachev, “at the toot of his being is committed to the preservation of the Soviet Empire and a Marxist- Leninist version of socialism”.[3]  One must then pose the question that how did this so called “soviet patriot” come to destroy the communist party which had ruled over the Soviet Union for seventy years?  Swedish political economist Anders Aslund has observed with regards to perestroika that a combination of economic problems and strains in foreign policy led to this.[4]  As one has been told, the driving force behind Gorbachev’s perestroika came from the decline in Soviet economic performance.  GNP rates had declined steadily in recent decades from 9.9 percent in 1958 to -1.0 percent in 1986.  By 1990 the economy had declined by 3 to 10 percent.[5]  In addition to this, political commentator Igor Klyamkin, writing in monthly magazine Zhuralist  expanded on Anders Aslund’s reasons behind Gorbachev undertaking such a major restructuring of the economy.  Klyamkin believed that the Soviet Union was incapable of solving their defense problems at the expense of social programs.  To Klyamkin, a modernization of the whole production system was needed and a technological revolution was impossible without the restructuring of the economy.[6]  Gorbachev’s reforms came in many different ways.  One is made aware that as soon as he launched his reforms there came a thirst for information from society.  The Moscow News, which was published in twelve languages in one hundred and forty countries became the example for press freedom that had never really been exercised before.[7]  One shall now be going on to discuss Gorbachev’s main economic reforms, concluding to why, in the end these were not successful.

Economic reform lay at the heart of perestroika.  One shall be alluding to how the economic problems of the Soviet Union were dealt with.  Historian Geoffrey Hosking has concluded that there were two perestroika’s launched by Gorbachev.  The first of these being the tightening of discipline and investigation of corrupt officials and mainly aiming for economic acceleration.[8]  The major flaws of the economy were stated to Gorbachev in 1985.  These included flaws such as the wasteful use of resources.  Products from the Soviet Union were using two times as much energy as Western good.  The Novosibirsk report of 1983 was one of the most critical assessments of the Stalinist economy.  The main critique was that the economic structure had remained largely the same since 1930, however the nature of the economic system had changed “beyond all recognition” [9]   One of Gorbachev's first acts on coming to power was the launching of an anti alcohol campaign.  Production of alcohol was sharply cut back, vineyards were destroyed, beer halls closed down and prices increased dramatically.  Although in theory this act was sound, in practice it had an even more damning effect on the economy.  It is estimated that ten billion rubles a year were lost in tax revenue to local and central authorities, placing even more demands on an already fragmented economic system.  The Government did however hope to recoup these losses by saving in other areas, however this was not successful.[10]  While this campaign may well have resulted in a decline in alcohol consumption, it led to an increase in organized crime, a serious decline in state revenues, which in turn led to a budgetary imbalance. Furthermore, this imbalance was overcome by printing even more money which caused problems with inflation, adding even more pressure to the already deeply fragmented economic state of the USSR.[11]  One would state that at this point it is little wonder that Gorbachev’s economic perestroika was doomed to fail.  Upon inheriting a deeply broken, stagnant economic system from Brezhnev. Andropov and Chernenko, Gorbachev and his advisors, mainly spurred on by Ligachev had plunged the country deeper into economic shock by the introduction of the ‘dry laws’.  This did not bode well for future reforms as, because the dry laws, billions of rubles were already being lost, crime and inflation were both on the increase.  One plus point for Gorbachev at this early stage must be his relations with other foreign officials, in particular Margaret Thatcher whom stated that she did indeed like Mr Gorbachev and could see herself doing business with him. Another plus point for Gorbachev must have been that the Soviet people were ready for change because of the damage and stagnation witnessed in the Brezhnev era.  One must go on further to discuss more of Gorbachev’s reforms and the weaknesses in them which seen the whole economic perestroika fail so badly.

Perhaps Gorbachev’s greatest mistake when coming to power was that he did not begin with immediate effect the radical restructuring of the economy.  In comparison, he began by making minor adjustments that would, in the future enable the whole economic system to function more efficiently.  This may have been Gorbachev’s downfall.  When he did begin to make these radical changes. They were seen by many as too little too late.