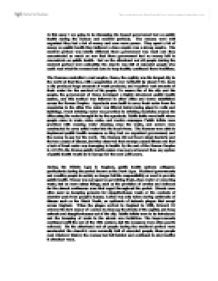 In this essay I am going to be discussing the impact government had on public health during the Roman and medivel perieods. The romans were well organised they had a lot of money and even more power. They spent a lot of money on public health they believed a clean empire was a strong empire. The medivel perieod was totally different there government was waek and they concentrated so much on war that there government had no money left to concentrate on public health. But on the otherhand not all people during the medevel perieod were unhealthy the church was full of educated people who could read what the romans had done to keep healthy continued there traditions. The Romans controlled a vast empire. ...read more.

The Romans were able to implement public health measures as they had an organized government, and the money to pay for the work. The Romans did not know about bacteria and the true causes of disease, but they observed that swamps caused illness and that a lack of fresh water was damaging to health. By the end of the Roman Empire in AD 476, the Roman public health system was more advanced than any system of public health would be in Europe for the next 1,400 years. During the Middle Ages in England, public health systems collapsed. particularly during the period known as the Dark Ages. Medieval governments and wealthy people in society no longer felt the responsibility or need to provide public health. ...read more.

On the otherhand not all people during the medievel perieod were uneducated the church's were normally full of educated people, these people read whatever history the romans had left behind and continued to stay healthy in simuluar ways. For my conclusion I think that the better the government is the healtheir the people. The romans had a lot of money they cared about public health and their people lived longer than that of the medivel perieod. During the medivel perieod they were so distracted about war and making money and getting slaves they didn't think about their own health. As my closing statement,I would like to state that the achievements of the Romans can be seen as even greater when considering that Rome had a population of around 1,000,000 in about 4 BC, whereas London's population was only about 40,000 in 1400 (following the loss of an estimated third of its population during the outbreak of plague in the mid-14th century). ...read more.