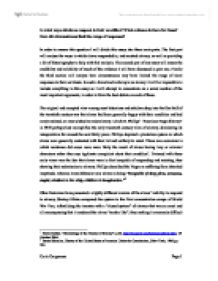 In what ways did slaves respond to their condition? What evidence is there for these? How did circumstances limit the range of responses?

In what ways did slaves respond to their condition? What evidence is there for these? How did circumstances limit the range of responses? In order to answer this question I will divide this essay into three main parts. The first part will analyse the ways in which slaves responded to, and resisted slavery, as well as providing a bit of historiography to help with this analysis. The second part of my essay will assess the credibility and reliability of much of the evidence I will have discussed in part one. Finally the third section will analyse how circumstances may have limited the range of slave responses to their servitude. In such a broad and wide topic as slavery it will be impossible to include everything in this essay so I will attempt to concentrate on a select number of the most important arguments, in order to form the best debate on each of these. The original and accepted view among most historians and scholars deep into the first half of the twentieth century was that slaves had been generally happy with their condition and had rarely resisted, or even wished to resist slavery. Ulrich B. Phillips' 'American Negro Slavery' in 1918 perhaps best exemplifies the early twentieth century view of slavery, dominating its interpretation for around the next thirty years. Phillips depicted a plantation system in which slaves were generally contented with their lot and unlikely to resist. Those rare occasions in which resistance did occur were more likely the result of slaves having lazy or criminal characters rather than any legitimate complaint about their condition1. Twinned with these early views was the idea that slaves were in fact incapable of responding and resisting, thus showing their submission to slavery. Phillips described the Negro as suffering from inherited ineptitude, whereas James Schouler saw slaves as being "incapable of deep plots, sensuous, stupid, obedient to the whip, children in imagination."2 Other historians have presented a slightly different version of the slaves' inability to respond to slavery. ...read more.

the early slave writers who spoke of slaves as content, docile and submissive, partly perhaps because the majority of these early writers were whites with pre-conceived views on slavery and Negroes. There are a number of other key considerations to be made regarding evidence of slave responses. The first of these is that resistance posed by slaves, at the time of its occurrence, was very often exaggerated and distorted for political reasons. For example, in the presidential campaign year of 1800, the Federalists made use of the Gabriel Plot to claim that Prosser and the slaves had been influenced by Democratic ideas associated with the French and American Revolutions. Federalist newspapers published letters allegedly from South Carolina claiming of an impending rebellion there involving between 700 and 6000 Negroes. The Republican press branded the story as "wholly false" and Aptheker confirms there being no evidence whatsoever pointing to an uprising.12 Another example of the exaggeration and distortion of evidence for political reasons is during the election years of 1856 and 1860, where accounts of slave resistance were probably exaggerated to stir up anti-Republican hysteria and to forge Southern unity at a time where sectional problems were at a critical stage. For example in Texas there are far fetched accounts of the total destruction by incendiaries of town after town.13 As well as exaggeration and distortion of evidence, it was also a common practice of the South to censor news of slave resistance, especially rebellions and insurrection. For example in December 1808 the Virginia Council advised Governor John Tyler not to inform the legislature of a current slave conspiracy as conferring this situation would increase slave spirits of insurrection, not only in Virginia but elsewhere too.14 Newspaper reports on slave resistance were often incomplete or absent altogether for this very reason. Therefore this complicates the historian's job of finding evidence of slave resistance, as he or she will often have to refer to government archives, personal letters and diaries, journals, and court records in order to ascertain the whole story. ...read more.

There were numerous other tactics adopted by slaveholders to limit the range of slave responses. These include the refusal to teach slaves to read and write, out of the fear that it would boost any chances of resistance, for example running away, and poisoning masters. Frederick Douglass gives many examples of this in his 'Narrative of the Life of an American Slave'. He explains how Mr Auld forbade his wife to teach Douglass by saying, "if you teach that nigger how to read, there would be no keeping him...he would at once become unmanageable...discontented and unhappy"24. Another method of the slaveholders, also exemplified by Douglass in his narrative, was the tactic of softening up the slaves every now and then with rewards and pleasures. For example slaves were occasionally given, holidays, such as at Christmas, or monetary awards for good behaviour, and it was also made known of the possibility for slaves to purchase their freedom. Therefore as a result this all created hope among the slaves and may have convinced many not to resist. So overall, three main conclusions can be drawn. The first regards how slaves responded to their condition and forms two main possibilities. The early slave writers such as Ulrich Bon Phillips saw slaves as submissive, docile and incompetent, whereas later historians such as Herbert Aptheker saw them as responding in numerous ways, ranging from insurrection to day-to-day resistance. The second conclusion to draw is that when considering the question of slavery, there is a lot to bear in mind with regards to evidence. Exaggeration, distortion, censorship, and scantiness of evidence are all possibilities with any slave literature, and must be examined before assessing the reliability and credibility of the source. The final conclusion to make is that there were many circumstances that may have limited the range of responses, such as 'paternalism', the lack of collectiveness among the slaves, and the methods of the slaveholders. There are also many more that I was unable to include. The consequences of these circumstances all differ depending on your view from the first conclusion. ...read more.