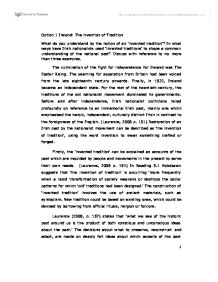 Option 1 Ireland: The invention of Tradition What do you understand by the notion of an 'invented tradition'? In what ways have Irish nationalists used 'invented traditions' to shape a common understanding of the national past? Discuss with reference to no more than three examples. The culmination of the fight for independence for Ireland was The Easter Rising. The yearning for separation from Britain had been voiced from the late eighteenth century onwards. Finally, in 1922, Ireland became an independent state. For the rest of the twentieth century, the traditions of the old nationalist movement dominated its governments. Before and after independence, Irish nationalist politicians relied profoundly on reference to an immemorial Irish past, mainly one which emphasised the heroic, independent, culturally distinct Irish in contrast to the foreignness of the English. (Laurence, 2008 p. 151) Restoration of an Irish past by the nationalist movement can be described as 'the invention of tradition', using the word invention to mean something crafted or forged. Firstly, the 'invented tradition' can be explained as accounts of the past which are moulded by people and movements in the present to serve their own needs. (Laurence, 2008 p. 154) In Reading 5.1 Hobsbawn suggests that 'the invention of tradition' is occurring 'more frequently when a rapid transformation of society weakens or destroys the social patterns for which 'old' traditions had been designed.' ...read more.

While Petrie focused on antiquities, a parallel movement to revive the Irish language had begun. The survival of the Irish language is an important way of presenting the Irish nation. O'Hickey (1898) states that the language is the only reliable index to the national life of the past. The founder of the Gaelic League, Douglas Hyde, set goals to promote language as one of a set of essential and distinctive cultural characteristics. It supports the claim that political independence of nations suppressed by dominant political cultures of Germany, Austro-Hungary, Russia and England can be gained by preserving the language. (Boyce, 2004 in Laurence, 2008 p.161) 'Nationalists' emphasis on the past inevitably drew on the period of the earliest Irish legends, before the era of written history.' (Laurence, 2008 p. 171) Other documents found in the Gaelic League archives advocated not simply the preservation of the Irish language, but to the extent of using it as a spoken tongue and as a modern literacy language. (Fahy, 1890 in Laurence, 2008 p. 162) It is an important part of the past, because Hyde's campaign to revive Irish language and its traditions had helped to evoke the movement for a complete partition from Britain. (Laurence, 2008 p. 163) A second way in which Irish nationalist shaped the past, was by rejecting the concept of British architecture. ...read more.

Even though they have been abandoned and plundered by local authorities and farmers for roads and building materials for centuries before, they held a significant place in Irish national consciousness. 'The sense of the past that prevailed in the Irish free state clearly embraced the notion of ancient glory and there is no doubt at all that in Ireland the archaeology was driven by this desire to vindicate the national past.' ('Ireland', 2008) To conclude with, Laurence, 2008, p. 156 says Irish nationalists referred to an idea of the Irish past in which the English were absent. The examples of cultural nationalism and preservation of built heritage described refers to a distinctively Irish past as justification for the claim to Ireland's status as a nation. (Laurence, 2008 p. 164) The ancient and uniquely Irish past provided a standpoint for the nationalists. 'The tradition has been mobilised to build a nationalist ideology in Ireland. It is a selective view of the past and conforms to the idea of the invention of tradition.' (Laurence, 2008 p. 174) Clearly, the concept of presenting the past in a specific way, in order to achieve specific goals is not founded in a desire to be wilfully misleading. Rather, it is for the nobler cause of affecting a specific change in a group of people, in Ireland's case to bring about a greater sense of national pride, based on noble and ancient heritage. ...read more.