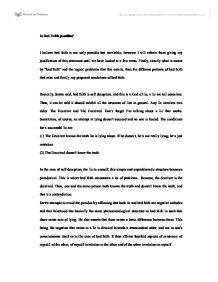 Is Bad Faith possible? I believe bad faith is not only possible but inevitable; however I will refrain from giving my justification of this statement until we have looked at a few areas. Firstly, exactly what is meant by "bad faith" and the logical problems that this entails, then the different patterns of bad faith that arise and finally any proposed resolutions of bad faith. Basically, Sartre said, bad faith is self deception, and this is a kind of lie, a lie we tell ourselves. Thus, it can be said it should exhibit all the structure of lies in general. Any lie involves two sides: The Deceiver and The Deceived. Don't forget I'm talking about a lie that works. Sometimes, of course, an attempt at lying doesn't succeed and no one is fooled. The conditions for a successful lie are: (1) The Deceiver knows the truth he is lying about. If he doesn't, he's not really lying; he's just mistaken. (2) The Deceived doesn't know the truth. In the case of self-deception, the lie to oneself, this simple and unproblematic structure becomes paradoxical. This is where bad faith encounters a lot of problems. Because, the deceiver is the deceived. Thus, one and the same person both knows the truth and doesn't know the truth, and that is a contradiction. Sartre attempts to avoid the paradox by affirming that both lie and bad faith are negative attitudes and that falsehood has basically the same phenomenological structure as bad faith in such that there exists acts of lying. He also asserts that there exists a basic difference between them. This being, the negation that exists in a lie is directed towards a transcendent other, and not to one's consciousness itself as in the case of bad faith. ...read more.

.(Sartre 1943: 58) The ambiguous interaction between the for-itself and the for-others is made manifest in affirming at once that one is what he has been and one is not what he has been. On the one hand, man "deliberately arrests himself at one period in his life and refuses to take into consideration the later changes." (Sartre 1943: 58) By absolution of his facticity through considering himself an immutable and finished product, he then refuses to face the responsibility for his existence. On the other hand, man "in the face of reproaches or rancor dissociates himself from his past by insisting on his freedom and on his perpetual re-creation."(Sartre 1943: 58) He then flees from answering for what he has been by seeking refuge in the absolution of his transcendence. The third and final pattern of bad faith is one of viewing one's self as other, by permanently assuming one's role, thereby transforming oneself to the mode of being-in-itself. Society demands that each member have a role to play in the proper functioning of society. Sartre presents as an example a waiter in a caf� who has applied himself to a portrayal of his role as a waiter. The waiter is guilty of bad faith because "the waiter in the caf� can not be immediately a caf� waiter in the sense that this inkwell is an inkwell, or the glass is a glass.".(Sartre 1943: 59) The waiter cannot assume the being of a waiter because he is primarily more than just a waiter; he is man. Sartre explains: It is precisely this person who I have to be (if I am the waiter in question) ...read more.

To conclude, all three patterns of bad faith have one thing in common: they are rooted in a contradiction that inheres in consciousness. The human reality is one characterised by dialectic of facticity and transcendence, of being what it is not and not being what it is, of a relation to the other and a relation to the Self. The resulting synthesis is a complicated gathering of contradictory phenomena. The human person therefore becomes a battleground between opposing forces. The resulting instability becomes itself the very condition for the inevitability of bad faith. Whatever position man takes, he is haunted with the said phenomenon. What complicates the problem of bad faith is the fact that bad faith is itself faith. Sartre holds that taking into consideration the nature of consciousness, belief and non-belief are but two sides of the same coin: But the nature of consciousness is such that in it the mediate and the immediate are one and the same being. To believe is to know that one believes, and to know that one believes is no longer to believe. Thus to believe is not to believe any longer because that is only to believe - this in the unity of one and the same non-thetic self-consciousness.(Sartre 1943: 69) Is bad faith then a vain phenomenon? At first glance, this may seem to be the case. On the contrary, the very contradiction that exists in bad faith is itself the very possibility of bad faith. The unitary structure of consciousness makes possible the phenomenon of bad faith. Is there a way out of this ontological deadlock? Early Sartre holds that there is none. Still, he paradoxically admits the possibility of good faith, even if this is just on a phenomenological level. ...read more.