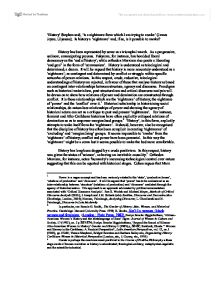 Is History a Nightmare

'History' Stephen said, 'is a nightmare from which I am trying to awake' (James Joyce, Ulyssess). Is history a 'nightmare' and, if so, is it possible to awake? History has been represented by some as a triumphal march. As a progressive, unlinear, emancipating process. Fukyama, for instance, has heralded liberal democracy as the 'end of history'; while orthodox Marxism also posits a liberating 'end goal' in the form of 'communism'. History is understood as teleological and determined; a dream. It will be argued that history is more accurately understood as a 'nightmare'; as contingent and determined by conflict or struggle within specific networks of power-relations. In this respect, crude, reductive, teleological understandings of history are rejected, in favour of those that analyse history as based on contingent inter-relationships between structure, agency and discourse. Paradigms such as historical materialism, post-structuralism and critical-discourse analysis will be drawn on to show how relations of power and domination are constructed through conflict. It is these relationships which are the 'nightmare' of history; the nightmare of 'power' and the 'conflict' over it.1 Historical scholarship in historicising social relationships, de-naturalises relationships of power and showing the agency of historical actors can act as a critique to past and present 'nightmares'. For instance, feminist and Afro-Caribbean historians have often explicitly critiqued relations of domination so as to empower marginalised groups.2 'History', in this form, explicitly attempts to wake itself from the 'nightmare'. It should, however, also be recognised that the discipline of history has often been complicit in creating 'nightmares' of 'excluding' and 'marginalising' groups. It seems impossible to 'awake' from the 'nightmare' of history; conflict and power have been perennial. In this way the 'nightmare' might be a coma but it seems possible to make the bed more comfortable. History has long been dogged by a crude positivism. In this respect, history was given the status of 'science', as having an inevitable causality.3 Orthodox Marxism, for instance, notes 'humanity's increasing technological control over nature suggesting that this can be equated with historical stages. ...read more.

Fairclough, provide avenues in which 'agency', 'structure' and 'discourse' can be theorised.22 Recent research by Anna Kane on 'experience' of Irish peasants during the 'Land War' seems to draw on these paradigms, noting how construction of 'meaning' by reflexive agents leads to particular forms of 'social action'.23 Thus, the 'nightmare' of history has to be understood as occurring through inter-relationships between 'structure', 'discourse' and 'agency'; it is through the 'agency' of 'historical actors' that the potential to make the bed more comfortable lies. Thus, history can be understood as a 'dream', as conflict free, as harmonious, as inevitably drifting towards some political or economic 'end-point', such as 'communism' or 'liberal democracy'. However, this is to ignore the nature and dynamic of history. History is defined by 'conflict', by the construction of relationships of power and domination: this is the 'nightmare' of history. Historical paradigms that allow for the theorisation of conflict without teleology, reductionism or determinism have been drawn on. It seems that relationships of power are usefully understood as relationships between the 'structural', 'discursive' and 'agency' of actors. Any 'end-point' in history is rejected, in this sense, 'awaking' from history is not possible. The 'nightmare' of history shows that historical agents through struggle can adopt, entrench or resist relations of power. It is through the 'agency' of actors in mediating 'discursive' and 'structural' relations that the 'nightmare' of history continues. In this respect, pessimists might suggest that 'history' is more of a 'coma' than a 'nightmare'; but people in 'comas' are passive; history is about struggle. 1 Power is a vague concept and has been variously related to the 'state', 'productive forces', 'relations of production' and 'discourse'. It will be argued that 'power' has to be understood as an inter-relationship between 'structure' (relations of production) and 'discourse' mediated through the agency of historical actors. This approach is an approach advocated by political commentators associated with 'Critical Discourse Analysis'. ...read more.

This essay is very well written, erudite and confident. The student makes a number of good arguments and uses material well.
5 stars.