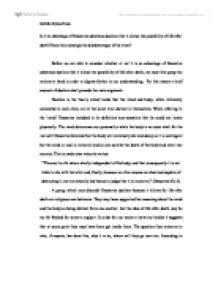 Is it an advantage of Descartes substance dualism that it allows the possibility of life after death?

Is it an advantage of Descartes substance dualism that it allows the possibility of life after death? Does this outweigh the disadvantages of the view? Before we are able to consider whether or not it is an advantage of Descartes substance dualism that it allows the possibility of life after death, we must first grasp the notions at hand in order to digress further in our understanding. For this reason a brief account of dualism shall precede the main argument. Dualism is the theory which holds that the mind and body, while intimately connected to each other, are at the same time distinct in themselves. When referring to the 'mind' Descartes included in its definition any sensation that he could not locate physically. The mind determines our personality while the body is an outer shell for the real self. Descartes believed that the body will eventually die and decay as it is contingent but the mind or soul is immortal and so can survive the death of the body and enter into eternity. This is made clear when he writes: "The soul is of a nature wholly independent of the body, and that consequently it is not liable to die with the latter and, finally, because no other causes are observed capable of destroying it, we are naturally led thence to judge that it is immortal." ...read more.

He pointed out that when people distinguish between the soul and the body they see the soul as something identifiably extra. Ryle uses the analogy of a foreigner asking where the team spirit is at a cricket game, as he expected it to be something separate from the field, players and umpires etc. However, team spirit is of course not a separate thing from the game but a collection of the behaviours of those involved in it. Like this Ryle believed that the soul is in fact another way of defining the way in which different people integrate with each other and that having such character traits as being generous, intelligent or pessimistic does not necessitate the existence of a soul. He argued the point that when you buy a pair of gloves you can say that you have bought a left-hand glove and a right-hand glove but not that you "had bought a left-hand glove, a right-hand glove and a pair of gloves" (Ryle, p.89) and so it is the same mistake when talking of the mind, body and soul. It could be argued that while the mind and body may be separate there is nothing to say that the soul does not die with the body. Dualists will not refute the fact that the mind and body are connected but then the question arises as to how far we can take this connection. ...read more.

So from birth the mind and body work together and through life they mature together and so ultimately should they not die together? Going back to the original question as to whether it is an advantage of Descartes' substance dualism that it allows the possibility of life after death it would appear that it depends on who he is trying to persuade. A religious person may think that it is an advantage while a secular person may think the disadvantages outweigh its advantages. When putting religion aside and attempting to study his theory with an open mind one may observe that Descartes arguments about dualism are strong and quite plausible. However, when discussing life after death his arguments seem to fail. When answering objections which have been put before him, he does on the one hand make outright claims about the mind and body but then he appears to use God as a scapegoat and makes the claim that "God alone can reply" (Descartes, p.84). This is similar to his whole theory of dualism. At the beginning his reasoning appears to be sound about dualism but then, when he introduces life after death, he appears to take an inductive leap which does not fit in with his earlier rationality. For these reasons it looks as if the allowance of life after death is a disadvantage to Descartes substance dualism. ...read more.