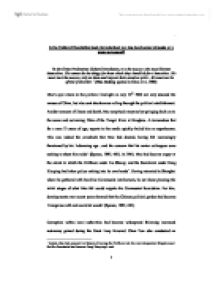 Is the Cultural Revolution best characterised as a top-level power struggle or a mass movement?

. Is the Cultural Revolution best characterised as a top-level power struggle or a mass movement? 'In the Great Proletarian Cultural Revolution, it is the masses who must liberate themselves. We cannot do the things for them which they should do for themselves. We must trust the masses, rely on them and respect their creative spirit...We must not be afraid of disorder.' (Mao Zedong quoted in Chan et al, 1980) Mao's epic return to the political limelight on July 16th 1966 not only stunned the masses of China, but also sent shockwaves rolling through the political establishment. Amidst rumours of illness and death, Mao surprised everyone by springing back on to the scene and swimming 15km of the Yangzi River at Hangkou. A tremendous feat for a man 73 years of age; reports in the media quickly hailed him as superhuman. This was indeed the comeback that Mao had desired, having felt increasingly threatened by his 'advancing age...and his concern that his senior colleagues were seeking to shunt him aside' (Spence, 1991, 603). In 1965, Mao had become angry at the extent to which the Politburo under Liu Shaoqi, and the Secretariat under Deng Xiaoping had taken policy making into its own hands1. Having retreated to Shanghai where he gathered with hard-line Communist intellectuals, he set about planning the initial stages of what Mao felt would reignite his Communist Revolution. For him, developments over recent years showed that the Chinese political garden had become 'overgrown with anti-socialist weeds' (Spence, 1991, 603). Corruption within local authorities had become widespread following increased autonomy gained during the Great Leap Forward. Chen Yun who conducted an assessment of local peasant's livelihoods in the summer of 1961 for the CCP, highlighted the bad morale in the countryside and discovered widespread dissatisfaction with the way politics was being conducted in rural communities. Both the Socialist Education Campaign and the ten points presented at the Central Committee Resolution in 1963 attempted to subject the authorities to the 'four cleanups'2. ...read more.

The masses, in this instance the students, could be divided into 'two antagonistic camps': the Loyalist Faction (otherwise known as the Conservative faction) and the Rebel Faction (Chen, 1992, 63). Throughout the 60s, the class debate had intensified and had resulted in the polarisation of the 'five red categories' and the 'black categories'13. This divide finally resulted in a huge eruption of violence in the summer and autumn of 1966 when Mao called on the masses to rebel against the establishment. Students, in particular those who claimed 'red birth' - the sons and daughters of the revolutionary cadres, took this opportunity to regroup in order to further distinguish themselves from the 'impure' (Chan et al, 1980, 413). Disassociating themselves from the Communist Youth League and forming their own Red Guard Organisations14, they set about launching the particularly violent 'Four-Olds Campaign', where everything associated with the old bourgeoisie was attacked. Whilst factions remained within the student movements, groups of largely middle-class background who were deemed too impure to be part of the 'Old Red Guards', joined the Red Terror movement in an effort to prove their revolutionary determination. Indeed, despite the clear divisions that separated the Conservatives from the Rebels, 'both factions were acting ostensibly to protect the Mao Zedong revolutionary line'. The students were spurred on by rallies held by Mao in Tiananmen Square such as that of August 18th 1968, where Mao greeted a million Red Guards sporting one of their infamous armbands. Even though the students initially reacted to Mao's commands and initiatives, some claim that even Mao himself, particularly during the first two years of the revolution, was not in control15. During the first three months of the Revolution, 'black category labels' were targeted through torture, abuse and killings with reports of genocide campaigns in the countryside. The intellectuals and the academics were indeed targeted but they only represented a portion of the victims (Chen, 1992, 71). ...read more.

This may indeed have been the case for periods of the Revolution where Mao failed to direct the movement that he himself had instigated. Nevertheless, this was seen as part of Mao's style of governance. He had not worked out a master plan for the movement prior to 1966 and was thus forced to react to difficulties as they arose. Indeed, it was impossible for Mao to foresee the response of the masses to their empowerment. Although many may argue that Mao had lost the control and direction of the movement that he himself had ignited, ultimately, when the masses were seen to be careering out of control, Mao, with the assistance of Lin Biao and his army24 were able to reassert their control. The Cultural Revolution was characterised by a movement called for from above and answered and reacted to from below. It was a 'conflict between a manipulative class of Party officials intent on preserving their power and a powerless mass of ordinary people, who had been repeatedly conned into seeing the Party apparatus as their champions against imaginary foes' (Unger, 1991, 33). At the head of this group of officials stood Chairman Mao, a champion of the right to rebel against an oppressive system. Depending on whom one asks, he was either seen as the devil or a saint. As Wei Jingsheng puts it eloquently, 'those who in 1966 had stood in Tiananmen like idiots, with tears in their eyes, before that man who stripped them of their freedom, returned courageously in 1976 to oppose him in that same place' (quoted in Sheehan, 2002, 13/14). The Cultural Revolution was Mao's last attempt at achieving his socialist utopian ideals. It was a two-sided exploitation movement driven by Mao and his elites' attempts to direct the masses, whilst taking direction from the masses themselves. Unfortunately, Mao's dreams of a perpetual revolution were ironically crushed by his own selfish ideals: 'Whoever tries to immortalise revolution will himself kill the revolution'25, sadly, that is exactly what Chairman Mao did. ...read more.