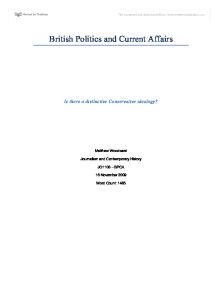 Is there a distinctive Conservative ideology?

British Politics and Current Affairs Is there a distinctive Conservative ideology? Matthew Woodward Journalism and Contemporary History JO1106 - BPCA 16 November 2009 Word Count: 1465 The first Conservative ideas appeared late in the 18th century and early 19th century as a consequence of the rapid political and economical ongoing change represented mainly by the French Revolution. However the first oppositions in conservative thought were seen throughout the world, as European Conservatism refused any theories regarding social or political reform whereas American and British Conservatism carefully adapted to the ideas of 'natural change' and adopted 'change in order to conserve.'1 Conversely, gradual Conservative acceptance of social change/reform through paternalism became apparent towards the end of the 19th century with the development of the New Right, inspired by Ronald Reagan, James Wilson (Reagan's advisor), John Redwood (Conservative MP) and Margaret Thatcher, as the ideas of 'social reform' were disapproved of and the promotion of a 'two-adult family caring for their children'2 became popular. Philip Norton exemplify says that "the (conservative) party is a corporate body which encompasses many themes and many interpretations of them"3 which perfectly demonstrates the ideological variation within the political party. ...read more.

Nevertheless, conservatism eliminates the possibility of ever having a perfect society as they believe removing human error from society would be part of a utopia based ideology and unrealistic, therefore conservatively impossible to achieve. In contrast, conservatives generally have a good understanding of human behavior due to their practical approach to the past. They understand that human beings can make mistakes and it is from not recommitting these mistakes that they can gradually progress. This is the reason for which conservatives are anti-reformists, as they do not believe that an abrupt change in society (i.e. Socialism/Communism) can ever work seen as though their society would be untested and have no backbone to it. This is why after Lenin proclaimed revolution in Russia in the name of Karl Marx, he had to invent socialism from scratch as no one knew (including Marx himself) what it was to become, just the fact that it needed to happen. Conservatives believe in the maintenance of status-quo and social stability but do not have a concrete code to which they must abide by and apply their policies to. Ideology-analyst Robert Eccleshaw states that Conservatism "is to be understood not as the expression of recurring habits and instincts, but as a distinctive ...read more.

We can conclude that conservatives do not have a distinct ideology of their own, as they are influenced by many different ideologies and beliefs. However, this is not seen as a downside to their party seen as though they dominated Downing Street for the majority of the 20th century, therefore proving that what they were building in Britain was promising and correct as they constantly kept winning the elections (on the other hand, it could be argued that their political success was due to other party's failure (i.e. Labour party)). However it is the political discourse of the party which is notably more important and not the concreteness of their ideology. The conservative party has a varied ideological background, whereas it is its great ability to adapt to the needs of the country that plays an essential part of its success. On a final note ideology is an aspect of politics which is important as it is, in most cases, the essential guide to the policies that they propose. Furthermore, we could suggest that the conservative party looks to supply the needs of the country by analyzing the current present and not committing the same mistakes of the past. ...read more.