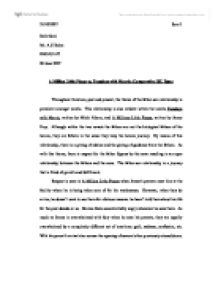 Rohit Soni Mr. A.G Rehm ENG4U1-07 09 June 2007 A Million Little Pieces vs. Tuesdays with Moorie: Comparative ISU Essay Throughout literature, past and present, the theme of the father-son relationship is prevalent amongst novels. This relationship is also evident within the novels Tuesdays with Morrie, written by Mitch Albom, and A Millions Little Pieces, written by James Frey. Although within the two novels the fathers are not the biological fathers of the heroes, they are fathers in the sense they help the heroes journey. By means of this relationship, there is a giving of advice and the giving of guidance from the fathers. As with this theme, there is respect for the father figures by the sons resulting in an open relationship between the fathers and the sons. The father-son relationship is a journey that is filled of growth and fulfillment. Respect is seen in A Million Little Pieces when James's parents meet him at the facility where he is being taken care of for his weaknesses. However, when they do arrive, he doesn't want to see them for obvious reasons: he hasn't told them about his life for the past decade or so. He also feels uncontrollably angry whenever he sees them. As much as James is overwhelmed with fury when he sees his parents, they are equally overwhelmed by a completely different set of emotions: guilt, sadness, confusion, etc. With his parent's arrival also comes the opening of several other previously closed doors. ...read more.

Being put in an institution where the victim's problems are supposed to be healed is truly showing the guidance from the father figures and with the participation with James in the Family Program shows guidance and the true feelings of care and love for his son. Guidance is also shown in Tuesdays with Moorie when Moorie's personality is further revealed when Mitch relays the story of his former professor's wild nights at "Dance Free" in Harvard Square. Moorie is an old man with an exceptionally youthful, enduring spirit, which preserves throughout his illness and will play a key role in his Tuesday lessons with Mitch. When the body that contains Moorie's youthful spirit is prescribed an expiration date by medical professionals, Moorie surely feels as if a part of him as been killed, as he can no longer enjoy even dancing, his long-time favourite hobby. Upon learning of his illness, Moorie wonders why the world does not stop and acknowledge his illness. He is perturbed at the sight of men and women going about their daily routine, namely because his routine has been capped. Life as he knows it is essentially over, and the story that follows tells of how Moorie copes with his own death sentence. Moorie is a very honest man, and throughout the book, must rely on his friends, family, and aides to do nearly everything from him, even the most personal necessities, such as undressing, which Tony must do for him in the pool locker room. ...read more.

Mitch makes a conscious and earnest effort to be as unlike his uncle as he can possibly be, opting for various jobs in various locales so that he may avoid the terrible monotony of corporate life he had seen his uncle suffer through. However, Mitch does say that he models himself after his uncle, as he models himself after Morrie. Both men come across as kind and giving and both have shaped Mitch as a person. In his reunion with Morrie, though, he realizes that by trying not to live the life his uncle had led, he has only done himself harm. He has immersed himself in work, not love, and is therefore unsatisfied. Seeking happiness in love versus seeking happiness in money serves as one of Morrie's most important lessons, as it is repeated numerous times throughout the book. After comparing both these books with strict and effective examples from each of the novels, A Million Little Pieces written by James Frey, and Tuesdays with Moorie, written Mitch Albom, it is evident that the father-son relationship was prevalent throughout both stories. This father-son relationship was a helpful source to the main characters of each book and their journeys. There was the giving of advice and the giving of guidance from the fathers. As with this theme, there is respect for the father figures by the sons, which easily creates an open relationship between the two members. The father-son relationship is a journey that is filled of growth and fulfillment and it was evident between both of these novels. 31/10/2007 Soni 1 ...read more.