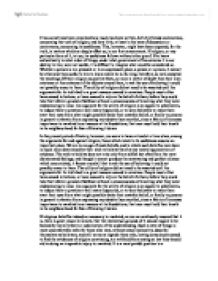 It has sometimes been remarked how much has been written, both by friends and enemies, concerning the truth of religion, and h

It has sometimes been remarked how much has been written, both by friends and enemies, concerning the truth of religion, and how little, at least in the way of discussion or controversy, concerning its usefulness. This, however, might have been expected; for the truth, in matters which so deeply affect us, is our first concernment. If religion, or any particular form of it, is true, its usefulness follows without other proof. If to know authentically in what order of things, under what government of the universe it is our destiny to live, were not useful, it is difficult to imagine what could be considered so. Whether a person is in a pleasant or in an unpleasant place, a palace or a prison, it cannot be otherwise than useful to him to know where he is. So long, therefore, as men accepted the teachings Of their religion as positive facts, no more a matter of doubt than their own existence or the existence of the objects around them, to ask the use of believing it could not possibly occur to them. The utility of religion did not need to be asserted until the arguments for its truth bad in a great measure ceased to convince. People must either have ceased to believe, or have ceased to rely on the belief of others, before they could take that inferior ground of defence without a consciousness of lowering what they were endeavouring to raise. An argument for the utility of religion is an appeal to unbelievers, to induce them to practise a well meant hypocrisy, or to semi-believers to make them avert their eyes from what might possibly shake their unstable belief, or finally to persons in general to abstain from expressing any doubts they may feel, since a fabric of immense importance to mankind is so insecure at its foundations, that men must hold their breath in its neighbourhood for fear of blowing it down. ...read more.

We may now have done with this branch of the subject, which is, after all, the vulgarest part of it. The value of religion as a supplement to human laws, a more cunning sort of police, an auxiliary to the thief-catcher and the hangman, is not that part of its claims which the more highminded of its votaries are fondest of insisting on: and they would probably be as ready as any one to admit, that if the nobler offices of religion in the soul could be dispensed with, a substitute might be found for so coarse and selfish a social instrument as the fear of h**l. In their view of the matter, the best of mankind absolutely require religion for the perfection of their own character, even though the coercion of the worst might possibly be accomplished without its aid. Even in the social point of view, however, under its most elevated aspect, these nobler spirits generally assert the necessity of religion, as a teacher, if not as an enforcer, of social morality. They say, that religion alone can teach us what morality is; that all the high morality ever recognized by mankind, was learnt from religion; that the greatest uninspired philosophers in their sublimest flights, stopt far short of the christian morality, and whatever inferior morality they may have attained to (by the assistance, as many think, of dim traditions derived from the Hebrew books, or from a primaeval revelation) they never could induce the common mass of their fellow citizens to accept it from them. That, only when a morality is understood to come from the Gods, do men in general adopt it, rally round it, and lend their human sanctions for its enforcement. That granting the sufficiency of human motives to make the rule obeyed, were it not for the religious idea we should not have had the rule itself. ...read more.

Yet we neither find that the Greeks enjoyed life less, nor feared death more, than other people. The Buddhist religion counts probably at this day a greater number of votaries than either the Christian or the Mahomedan. The Buddhist creed recognises many modes of punishment in a future life, or rather lives, by the transmigration of the soul into new bodies of men or animals. But the blessing from Heaven which it proposes as a reward, to be earned by perseverance in the highest order of virtuous life, is annihilation; the cessation, at least, of all conscious or separate existence. It is impossible to mistake in this religion, the work of legislators and moralists endeavouring to supply supernatural motives for the conduct which they were anxious to encourage; and they could find nothing more transcendant to hold out as the capital prize to be won by the mightiest efforts of labour and self-denial, than what we are so often told is the terrible idea of annihilation. Surely this is a proof that the idea is not really or naturally terrible; that not philosophers only, but the common order of mankind, can easily reconcile themselves to it, and even consider it as a good; and that it is no unnatural part of the idea of a happy life, that life itself be laid down, after the best that it can give has been fully enjoyed through a long lapse of time; when all its pleasures, even those of benevolence, are familiar, and nothing untasted and unknown is left to stimulate curiosity and keep up the desire of prolonged existence. It seems to me not only possible but probable, that in a higher, and, above all, a happier condition of human life, not annihilation but immortality may be the burdensome idea; and that human nature, though pleased with the present, and by no means impatient to quit it, would find comfort and not sadness in the thought that it is not chained through eternity to a conscious existence which it cannot be assured that it will always wish to preserve. ...read more.