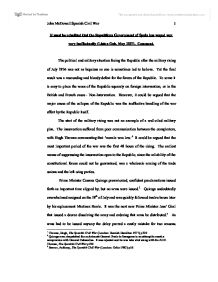 It must be admitted that the Republican Government of Spain has waged war very ineffectually (Liston Oak, May 1937). Comment.

It must be admitted that the Republican Government of Spain has waged war very ineffectually (Liston Oak, May 1937). Comment. The political and military situation facing the Republic after the military rising of July 1936 was not as hopeless as one is sometimes led to believe. Yet the final result was a resounding and b****y defeat for the forces of the Republic. To some it is easy to place the woes of the Republic squarely on foreign intervention, or in the British and French cases - Non-Intervention. However, it could be argued that the major cause of the collapse of the Republic was the ineffective handling of the war effort by the Republic itself. The start of the military rising was not an example of a well-oiled military plan. The insurrection suffered from poor communication between the conspirators, with Hugh Thomas commenting that 'morale was low.'1 It could be argued that the most important period of the war was the first 48 hours of the rising. The earliest means of suppressing the insurrection open to the Republic, since the reliability of the constitutional forces could not be guaranteed, was a wholesale arming of the trade unions and the left-wing parties. ...read more.

Among the victims were women in nightclothes and children in pyjamas.13 Reports would also reach other European states of the murder of priests, nuns and the burning of churches. Although Nationalist repression would be as b****y the damage was less of a concern to a military government. The international standing of the Republic would never recover with disastrous consequences for the long-term diplomatic efforts of the Republic. What is clear is that taking quick decisions was never easy in Spain and with the dissipation of authority by the proliferation of committees and workers militia the Republic had difficulty in establishing co-ordinated central control. There was also the conviction among most groups on the left, particularly the anarchists, that military discipline was not something required by a committed revolutionary. The communists disagreed, and as there influence spread with the arrival of Russian military aid the scene were set for what became known as 'the war within a war.' A 'war-inept military and civil leadership - warring political factions',14 these problems typified the early days of the Republic. This division in Republican ranks might not have been disastrous had their opponents also been divided. ...read more.