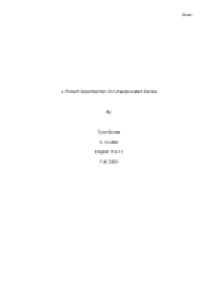 ﻿Brown J. Robert Oppenheimer: An Unappreciated Genius By Tyler Brown C. Coulter English 110-12 Fall 2009 ________________ Topic Sentence Outline 1. Is J. Robert Oppenheimer a hero or a bringer of death? 2. Who were his parents? 3. What were his conditions in early life? 4. What was his early schooling like? 5. What got him interested in physics? 6. What was his college life like/ where did he go? 7. How did he become involved with the Manhattan Project? 8. What effect did atomic weapons have upon the world? 9. Why was his security clearance taken away? 10. What did he do with his life after being kicked out of the AEC? 11. What effect did he leave on the world/ what do we do with him now? J. Robert Oppenheimer: An Unappreciated Genius J. Robert Oppenheimer is considered by some to be an American hero, and by others as the physical manifestation of humanistic evil. It is not often that one individual can be viewed as both a saviour and a demon. Usually these two forces oppose each other, but in Oppenheimer?s case he was labeled as both. His contribution to atomic theory and furthermore, his assistance in the weaponization of this theory has put him in the midst of a heated debate. Even though he is viewed by some as a modern grim reaper, and his security clearance was taken away in 1953 in response to accused communist sympathies, history shows that he was actually a very patriotic man who dedicated his life to the progression of scientific knowledge used only to benefit his country. ...read more.

When the faculty met to consider this request, [one member] said: ?Obviously he is a liar, but he should get a Ph.D for knowing their titles? ? (Pais [8]) Oppenheimer continued at Harvard until he ?graduated summa c*m laude in 1925 and went to England to conduct research at Cambridge University's Cavendish Laboratory? (atomicarchive [1]) Finally, in 1927, Oppenheimer received a PhD in Quantum Physics from the University of Gottingen in Germany. ?When he returned from Europe in 1929, already recognized as a physicist of great promise, he accepted concurrent appointments at the California Institute of Technology in Pasadena and the University of California in Berkeley? (J. ROBERT OPPENHEIMER His Life & Times [3]) While Robert was in California he engrossed himself in his work. It was almost as if all his brain could handle was the development of the atomic theory. Because of this great concentration, he because isolated from the rest of the world. At one point he remarked: ?I was not interested in and did not read about economics or politics. I was almost wholly divorced from the contemporary scene in this country. I never read a newspaper or current magazine ... I had no radio, no telephone ... I was interested in man and his experience. I was deeply interested in my science, but I had no understanding of the relations of man to his society" (J. ROBERT OPPENHEIMER His Life & Times [3]). Because of this isolation, Robert had no real grip on the happenings on the world around him. ...read more.

However, he was overruled by President Harry Truman? (Tytler [1]). Robert?s obvious disagreements with the development of the hydrogen b**b fostered disconcertment in the political sphere. In 1953, after many hearings and testimonies for and against Oppenheimer, the Atomic Energy Commission finally revoked his security clearance. While his interest in physics never disappeared, this public humiliation crippled his zealous spirit. In 1963, in an attempt for recompense, ?he was forgiven for his former far-left leanings and was awarded the Enrico Fermi medal by President Lyndon B. Johnson. This award honors scientists of international stature for their lifetime achievements in the development, use, or production of energy? (Tytler [2]). In the later years of his life (1947-1966), Oppenheimer ?served as the Director of Princeton's Institute for Advanced Study. There, he stimulated discussion and research on quantum and relativistic physics... [He] retired from Princeton in 1966? (atomicarchive [1]). After a long bout with throat cancer (most likely a result of his chain smoking habit) J. Robert Oppenheimer died on February 16, 1967. To this day it is debated wither the impact he made upon the world was a positive or negative one. All we can conclude is that Robert?s life was one dedicated to learning and to his country. He gave his life to the development of the atom b**b for the protection of his country. He chose to allow the moral ramifications of life lost to rest upon his shoulders. If for no other reason then that, he deserves the respect of the nation that he so loved. J. Robert Oppenheimer: the father of the atomic b**b. ...read more.